In Celebration of the Introverts

I am an introvert. I love hanging out with people, and in equal measures, I also find it draining. We live in a society that tells us the best people are always the center of attention – that the coolest people are the ones who thrive in the spotlight. Contemporary American society encourages kids to grow out of their shyness, become more social, and make more friends. When a kid is playing by themselves in the classroom, we encourage them to go find a friend to play with. I believe that we genuinely do this with good intentions – we do not want kids to be lonely, and we want them to have good relationships with their peers. However, when kids are told time and time again that their natural way of being should be changed, it translates to introverts like me thinking there must be something wrong with us. So many books, movies, and TV shows center around a shy kid without many friends who, by the end of the storyline, ends up gregarious and outgoing and has finally found acceptance in the world’s eyes. We do not make space for quiet people. We assume that these quiet people are shy, that they are uncomfortable, and that if we can just get them to open up, they will have a better life.

I read Spark by Sarah Beth Durst when it came out in 2019. This middle grade novel is about a girl named Mina who is exceptionally quiet. She lives in a world where the climate is controlled using people’s bonds with storm beasts. When her beast hatches, everyone is shocked to see that her beast is a lightning beast, because the people paired with lightning beasts tend to be bold and loud and brave. I’m here for most books with dragons, so I immediately grabbed a copy when I heard about the book. I was expecting the typical “shy girl becomes bold and loud and brave through her partnership with this lightning beast” narrative. I was genuinely floored when at the end of the book, Mina is still quiet. She has developed a few close friendships, but she has not fundamentally changed who she is. She is able to showcase her bravery and (spoiler alert) save the day, without somehow transforming into an extrovert along the way. It was the first book that I have ever read where an introvert’s skills were useful, and where she didn’t need to transform into a brand-new person to be worthy of respect.

I recently read How to Party Like a Snail by Naseem Hrab, and I can now confidently say that my party preferences align with snail party preferences. The main character, Snail, loves parties… the quiet parts about parties, anyway. He loves confetti and making new friends using his inside voice and other small moments. He sometimes finds the loudness of parties overwhelming, but he can always withdraw inside his shell, remaining at the party with his friends in a way that works well for him. However, his friends don’t understand his partying style, so they stop inviting him to parties. Snail decides to throw his own party – a quiet one, in a way that will work well for him. My introvert self was celebrating with Snail, and you’d better believe I’ll be throwing my own snail party soon.

One of the incredible things I have seen over the course of my time working with Mackin is the emphasis on diversity that many school libraries are striving for. As librarians and teachers, we know that it is crucial to showcase diverse experiences, diverse people, and diverse situations. We know that kids feel validated and valued when they see people like themselves included in books. We know that kids can learn about other people’s experiences and become more empathetic and open by reading about kids who are unlike themselves. As we continue to emphasize diversity in our collections, please hear my quiet plea for introverts to be included in collections as well. May the quiet kids feel loved and accepted and wonderful, just the way they are. The following books are some of my favorites that feature introverts. They tend to skew toward a picture book audience; hopefully, we will see more books coming out soon where introversion is celebrated for older students as well. All descriptions come directly from the publishers. 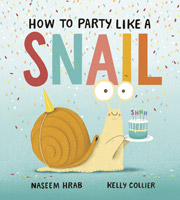 Snail is a party animal. Well…kind of. He loves the quiet things about parties: confetti, making new friends (using his indoor voice, of course), and the silence before everyone yells, “SURPRISE!” But when parties get loud, Snail retreats into his shell. He’s still partying, but no one can tell he’s having a good time while he’s tucked inside. His friends don’t understand why he doesn’t love loud parties like they do, and soon Snail’s party invites begin to dry up.

In response, Snail decides to plan his own quiet party, complete with warm milk and lullaby lip-syncing. But something is missing—does Snail long for the “loud” after all? That’s when Stump, a fellow introvert, chimes in with an idea. Maybe Snail isn’t missing the “loud” … maybe he’s just missing a friend to share the quiet. Together, Stump and Snail turn the lullabies down low and celebrate “the shush” together.

With comics-style storytelling and lovable characters, this hilarious tale makes quiet so fun that even the most extroverted readers will want to SHHHelebrate!

Emile is not shy—he is quiet.

Emile may seem timid and shy on the outside, but on the inside, he is bustling with imagination. While grownups and even other kids may see Emile as the shy kid who doesn’t raise his hand in class, we know that Emile is actually a high-seas adventurer, a daring explorer, and a friend to wild beasts.

This story honors and encourages the beauty of knowing ourselves for exactly who we are. Emile’s world shows us that the mind of a quiet child can be as rich, expansive, and bold as that of any other (more extroverted) child.

Where is Bina Bear?

Tiny is having a party, but Bina Bear is nowhere to be found. Is that Bina hiding under a lampshade? It looks like Bina . . . but it must be a lamp. Is that Bina beneath the fruit bowl? It could be . . . but it’s probably just a table.

Searching for Bina, Tiny realizes something is wrong and sets out to make it right. This is a humorous yet sincere picture book about friendship, understanding, and embracing our loved ones just as they are.

A Way with Wild Things

Poppy loves nature, and can be found carrying on conversations with ladybugs or singing with cicadas, but good luck spotting her indoors and around people! She’s a master of camouflage, always finding a way to blend into her surroundings. Some might call her a wallflower.

At a party, Poppy stays out of sight. But when a very special bug lands on the cake, Poppy can’t resist popping out to see it. Soon, the rest of the guests notice the beautiful dragonfly, and Poppy, too. Maybe she’s not a wallflower after all, but a wildflower.

This poetic and evocative story celebrates the shy and introverted kids among us, as well as the other small creatures to be found if we look closely enough.

Have you ever been a little anxious about going to a party? Jim Panzee feels that. Porcupine is having a big party, and according to Jim’s best friend Norman, there will be—gulp—dancing. Jim can DEFINITELY not dance. When he tells his friends, they all try to teach him cool moves—surely that’s the only reason Jim isn’t excited about this party! Now, their job complete, the other animals sweep Jim along, all the way to the dance floor. Jim is dipped, swayed, and twirled until he can’t take it anymore—he just doesn’t like to dance! When he lets everyone know, he’s met with disbelief…until Water Buffalo reveals that he doesn’t much care to dance, either. As more and more animals have the courage speak their truths, does this mean there’s no place for them at this party? In this hilarious sequel to Grumpy Monkey, kids will learn that it’s okay not to go with the flow if they’re uncomfortable, and that speaking up about what they need can help others speak up, too—and maybe they need the same thing!

When a shy girl and her dragon-like companion discover their country’s idyllic weather comes at a steep—and secret—cost, they recruit fellow students to defy authority and attempt to spread the truth.

Storm beasts and their guardians create perfect weather every day, and Mina longs for a storm beast of her own. But when the gentle girl bonds with a lightning beast—a creature of fire and chaos—everyone’s certain it’s a mistake. Everyone but Mina and the beast himself, Pixit. Quickly enrolled in lightning school, Mina struggles to master a guardian’s skills, and she discovers that her country’s weather comes at a devastating cost—a cost powerful people wish to hide. Mina’s never been the type to speak out, but someone has to tell the truth, and, with Pixit’s help, she resolves to find a way to be heard.

Susan Cain sparked a worldwide conversation when she published Quiet: The Power of Introverts in a World That Can’t Stop Talking. With her inspiring book, she permanently changed the way we see introverts and the way introverts see themselves.

The original book focused on the workplace, and Susan realized that a version for and about kids was also badly needed. This book is all about kids’ world—school, extracurriculars, family life, and friendship. You’ll read about actual kids who have tackled the challenges of not being extroverted and who have made a mark in their own quiet way. You’ll hear Cain’s own story, and you’ll be able to make use of the tips at the end of each chapter. There’s even a guide at the end of the book for parents and teachers.

This insightful, accessible, and empowering book, illustrated with amusing comic-style art, will be eye-opening to extroverts and introverts alike.

Bellen Woodard: Ensuring That No Kid Is “Disincluded”Author Interviews