Bill Konigsberg: Bringing Suicide and Depression into the Light 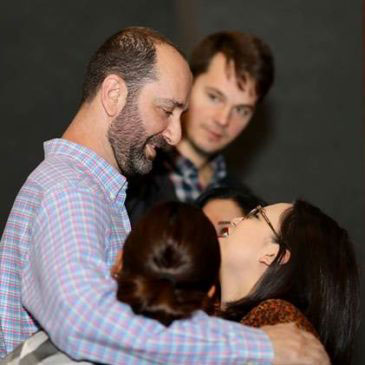 Bill Konigsberg at NCTE in Houston in November 2018, right after his Papa Bear speech

Young adult author Bill Konigsberg is the recipient of numerous awards and honors, including the Stonewall Book Award, the Sid Fleischman Award for Humor, the Lambda Literary Award, and many appearances on the YALSA Best Fiction for Young Adults list. He’s also the inspiration for an ALAN award named the Bill Konigsberg Award for Acts and Activism for Equity and Inclusion through Young Adult Literature.

Konigsberg’s sixth novel, The Bridge, was released this September and it has already received strong reviews, including a starred review by Booklist that says, “This thought-provoking examination of depression, loneliness, suicide, family, friendship, and hope is both uplifting and terrifying…. This is a poignant, sincere look at the many ways mental illness affects young people.” The book follows two teens, Aaron and Tillie, who are strangers to each other until they decide to jump from the same bridge at the same time. Here, Konigsberg talks with Lisa Bullard about his riveting new novel.

Bill, congratulations on the positive reception for The Bridge. The book is not only a powerful read, but has the potential to be a critical resource for educators and others who works with teens. That being said, I’m glad that Booklist included the words “uplifting” and “hope” in their review, because those elements are also in the novel. I certainly found it life-affirming. What led you to write about depression and suicide?

Thank you so much! I do hope that people find the book life-affirming, as that is the most important thing to me in writing a book like this. I so dearly want people to find reasons to “stay another day.”

I wrote about suicide and depression because it was the next story I had to tell. I’ve had a lot to say about LGBTQ issues, and I said a lot about that in my first five novels. Dealing with suicidal ideation and severe depression has been just as big a part of my life, and it was time for me to explore that. These topics are so necessary for young people these days, because there’s an epidemic of suicide in our country, and indeed in the world. 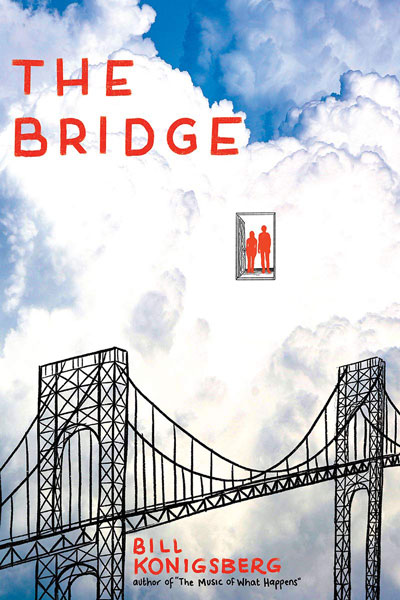 You provide an opening note to The Bridge in which you talk about your struggles with depression and your suicide attempt. This created a powerful feeling of authenticity for me as I read the book. Did you also do additional research?

The truth is that for me, it all comes from within. When I start writing a character, I start with a part of me and I build out. In that way, Tillie and Aaron do have a fair amount of me in them. As for research, I think of life as research. Yes, I did do some research for this book, for things that are out of my understanding—what’s it like to be a parent and lose a child to suicide? What’s it like to be adopted and of a different ethnic background than your family? But it has to start from a place of lived experience for me to even begin to build a character. Research is something that happens along the way as I come to situations and experiences I haven’t faced. But for the kind of writer I am, it has to connect to the pre-research me in some way.

“I so dearly want people to find reasons to ‘stay another day.’”

You say that the characters have a fair amount of you in them. Aaron writes songs and hopes to gain fame through his music. Were you like that as a teenager?

Aaron’s desire to be famous and his songs come directly from my life. Directly. The lyrics are lyrics I wrote as a teenager. I was part of a duo with Rhonda Ross, the daughter of Diana Ross, and yes, I craved praise and acknowledgment. I think in short it was a desire to be seen, and a feeling of unworthiness that drove those desires, and I built Aaron around those desires and feelings. In fact, becoming a well-known author for young adults marries two of my greatest takeaways from my teen years: that ongoing need for notoriety, and the desire to help younger people feel seen and heard and represented. 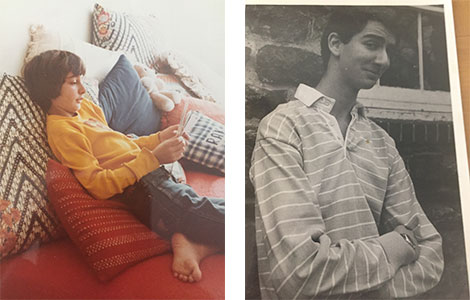 Your story makes it clear how devastating an impact someone’s suicide has on those around them. In one section, you even present glimpses of future consequences for individuals who are strangers to your main characters. What inspired you to include these “butterfly effect” moments in the story?

I loved writing that section and thinking about how the world outside of these two characters’ circles would be forever changed by their absences. I think from an “anti-suicide” perspective, this is a key aspect of the story. I know that at times when I’ve been depressed, I’ve thought that it wouldn’t matter if I disappeared from the world. That is so untrue, and it’s untrue for every single one of us.

As for including the butterfly effect, I actually started there. That was my first thought, and then, as I got deeper into the story, I found myself focusing more on the characters themselves and their families. That, after all, is the central aspect of the novel. First and foremost, we want to know how Tillie and Aaron and their families are impacted by these life-or-death choices.

“I know that at times when I’ve been depressed, I’ve thought that it wouldn’t matter if I disappeared from the world. That is so untrue, and it’s untrue for every single one of us.”

As you point out in the author’s note, LGBTQIA+ youth are at a much higher risk for suicide attempts. Your character Aaron is gay and out, but those don’t seem to be key factors in his suicide attempt. What shaped that decision for you?

My feeling was that we’ve read that story. There are plenty of stories out there that deal with coming out and the bullying of LGBTQ youth, and we’ve seen LGBTQ characters contemplate suicide. I’ve written some of those stories! I wanted this story to be its own thing, and so I put Aaron in a very liberal and LGBTQ-friendly school so we could focus more on depression itself. Another way of saying this is that there are people who die by suicide because they are LGBTQ, and those who die by suicide AND they are LGBTQ. When I had my suicide attempt at 27, mine was the latter. It doesn’t mean that being LGBTQ wasn’t related to my attempt, but it wasn’t at its center. Ditto for Aaron, I think. Being queer impacts everything about a person, but it doesn’t always have to be the central factor for everything that happens in a queer person’s life. 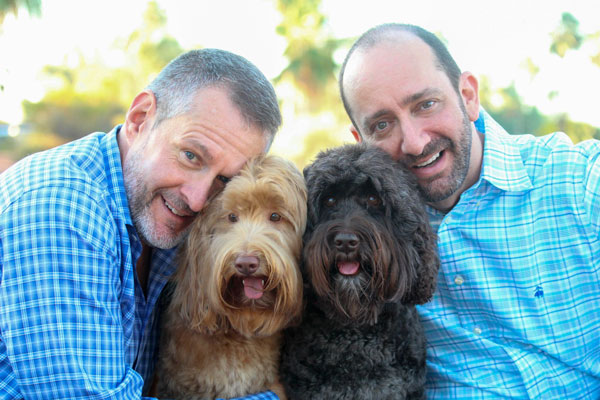 Bill Konisgberg with husband Chuck and dogs, Mabel and Buford 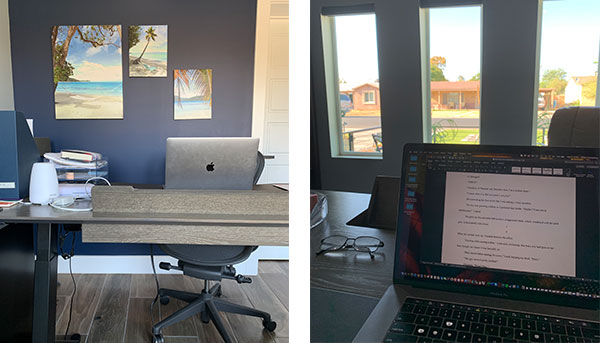 The view from Bill Konigsberg’s writing space in Central Phoenix 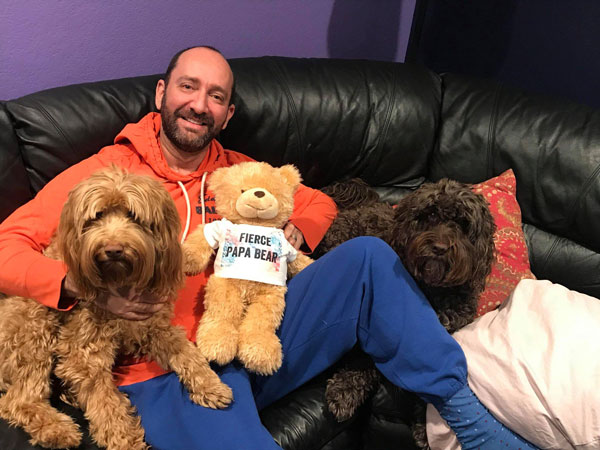 You lead student discussions about suicide around the country. Some adults resist discussing this topic with young people because they worry about glamorizing suicide. Others stay silent because of the taboo nature of mental illness. Why is it so critical that we discuss suicide openly?

I wish that there had been a camera at some of these discussions with young people, because I do believe that it is critical to take suicide and depression out of the closet and bring it into the light so we can see it for what it is. I wish for the camera because then people could see how connected these young people felt with these discussions, and how much so many of them wanted—or needed—to share their feelings.

In these discussions, and by sharing my story of how I almost didn’t make it to 30, I am able to show how the world would be different had I not made it. And listening to kids tell their stories allows them to feel heard, and feeling seen and heard is critical for young people. It’s one of the cures for this suicide epidemic, I believe.

The key to these conversations, though, lies in a word you used: glamorizing. The worst, most damaging thing we can do to young people is to make suicide in any way alluring or glamorous. We need to see it for what it is, and that’s what I attempted to do by shining the light on the bridge in this book.

I like to imagine an author’s books sitting together on a shelf and forming a kind of musical ensemble. How will adding The Bridge enrich the music already being played by your body of work?

I apologize in advance for the narcissism involved in this answer, but the way I see it is that the bookshelf is me. It started thin, with a simple novel about coming out in the spotlight, which is metaphorically from my life, from when I came out while working at ESPN. With every book, the shelf became brighter and deeper and more representative of the authentic me, of the full picture of my life, with all its warts. Adding The Bridge brings in the reality of my lifelong struggle with severe depression.

“Listening to kids tell their stories allows them to feel heard, and feeling seen and heard is critical for young people. It’s one of the cures for this suicide epidemic, I believe.”

Your website, BillKonigsberg.com, has a fantastic Resources page for anyone with questions about suicide prevention. You’ve also shared resources on your Facebook page, including this post. Is your website the best way for readers to connect with you? 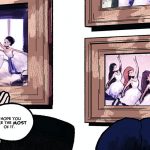 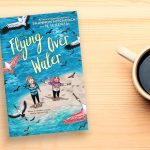