Big Bunny by Rowboat Watkins. 9781452163901. 2018. Gr K-2.
A parent and child argue about the size of a bunny the child saw, and after the parent lets the child tell the story, the rabbit becomes a huge scary monster who eats entire cities.

Blue Rider by Geraldo Valerio. 9781554989812. 2018. Gr PK-2.
A young girl finds a book on the ground and takes it home. Mesmerized by the brightly-colored illustrations, she imagines that they take her to a new place through a natural landscape and away from the city.

Five Busy Beavers by Stella Partheniou Grasso (Christina Battuz). 9781510721456. 2018. Gr PK-1.
Five beavers are busily building a dam on the river as, one by one, they are lured away by their fellow forest creatures.

Pignic by Matt Phelan. 9780062443397. 2018. Gr PK-1.
The pig family has just about everything they need for the perfect pignic: a kite, lots of friends, and a full picnic basket. But one thing is missing. Then it rains on their picnic, and they have the last ingredient for a perfect day—mud!

Sugar and Snails by Sarah Tsiang & Sonja Wimmer. 9781773210056. 2018. Gr K-2.
A boy and girl visiting their grandfather don’t agree with the traditional rhyme about little boys and girls. He comes up with lists of traits that more closely fit with their personalities.

Aru Shah and the End of Time (Pandava, Book 1) by Roshani Chokshi. 9781368012355. 2018. Gr 4-6.
Twelve-year-old Aru exaggerates her family’s status in order to fit in at her private school. But when three classmates come to the Museum of Ancient Indian Art and Culture—where Aru actually spends most of her time—she is dared to prove an ancient lamp is cursed, inadvertently freeing an ancient demon.

Ice Wolves (Elementals, Book 1) by Amie Kaufman. 9780062457981. 2018. Gr 4-6.
Orphaned twins Anders and Rayna are separated when their shape-shifting powers manifest. Anders turns into an ice wolf, and Rayna a scorch dragon—an ancient enemy of the wolves. Each kidnapped by their respective clans, they are trained to battle the other. Anders just want to find a way to reunite with his sister, but also wonders if there is something else behind the ancient feud.

Stuck in the Stone Age (Story Pirates Present, Book 1) by Goeff Rodkey (ill. by Hatem Aly). 9781635650891. 2018. Gr 4-6.
A janitor named Tom Edison, who dreams of becoming a scientist, and shy scientist Dr. Morice are in the lab when an accident sends them back in time to the Stone Age. There they must work together to battle cavemen, saber-tooth tigers, and other dangers while trying to get back to their own time. Full of jokes, this book also offers practical advice for writing one’s own stories.

Survival Tails : The Titanic by Katrina Charman. 9780316477857. 2018. Gr 4-6.
Mutt sneaks on board the Titanic when he realizes his owner and BFF Alice is going to leave without him. He meets up with King Leon the rat and Clara, the Captain’s cat, and agrees to help look after three kittens abandoned in a lifeboat. When the ship hits an iceberg, the animals must locate their humans and find a way to survive!

The Tale of Angelino Brown by David Almond. 9780763695637. 2018. Gr 4-6.
Bus driver Bert Brown finds a tiny boy angel in his pocket and brings him home to his wife, Betty. The couple is thrilled to have a little boy of their very own and name him Angelino. However, not everyone likes Angelino—villains are waiting and watching for their chance to snatch him if he isn’t careful!

Too Much Space! (Beep and Bob, Book 1) by Jonathan Roth. 9781481488532. 2018. Gr 1-4.
Only the most elite kids in the galaxy attend Astro Elementary near Saturn, but Bob doesn’t think he belongs there. Then he meets Beep from the plant Orth, who sees Bob as his adoptive mother. In their space log (or SPLOG), Bob relates their funny adventures while Beep illustrates them.

A Bad Night for Bullies (Goolz Next Door, Book 1) by Gary Ghislan. 9781629796772. 2018. Gr 4-7.
Life in his small town was boring for Alex, stuck in his wheelchair. Then Frank Goolz, a famous horror writer, and his daughters moved in next door. Alex’s life takes a decisive and exciting turn when he realizes that Mr. Goolz’s horror stories don’t come from his imagination, but from the family’s own real-life paranormal mishaps.

Bone’s Gift (Ghosts of Ordinary Objects, Book 1) by Angie Smibert. 9781629798509. 2018. Gr 6-8.
Bone’s Gift is to sense the histories of everyday objects, including her deceased mother’s yellow sweater. When she receives a note claiming that her mother’s Gift killed her, Bone sets off to discover the truth or her mother’s death—and of the Gifts themselves.

Out of the Wild Night by Blue Balliett. 9780545867566. 2018. Gr 4-7.
Ancient ghosts on the island of Nantucket want to protect the island from the adults, led by contractor Eddy Nold, who are trying to destroy its antique houses and its land. They choose a few local kids to try to stop the construction. The kids race to set things right before the angry ghosts decide to act and things spiral out of control.

The Spinner Prince (Pride Wars, Book 1) by Matt Laney. 9781328707260. 2018. Gr 5-7.
Prince Leo is next in line for the throne of Singara. He is also from a race of super-evolved felines. At his age, he is required to hunt a deadly slaycon to prove he is worthy. Even worse, Leo’s cousin is rebelling against the country, and Leo has just realized that he is a Spinner, cursed with a forbidden power.  Leo must prove his worth, defeat his cousin, keep his throne, hide his curse…and stay alive.

The Strange Star by Emma Carroll. 9780399556050. 2018. Gr 5-8.
One stormy summer evening at a villa in Switzerland, Lord Byron challenges his friends to tell a scary ghost story. Mary Shelley is having trouble thinking of a story when there is an unexpected person at the door. A young girl named Lizzie, covered in scars, has collapsed on the doorstep. They bring her in and hear her dark tale of evil happenings in her village involving a mad scientist, electricity, and the undead.

A World Below by Wesley King. 9781481478229. 2018. Gr 5-8.
While Mr. Baker’s eighth-grade class is on a field trip to Carlsbad Caverns, an earthquake hits. The students find themselves in an underground lake in the dark. With their teacher now missing, they have to decide on the best chance for survival.

Children of Blood and Bone (Legacy of Orisha, Book 1) by Tomi Adeyemi. 9781250170972. 2018. Gr 9-12.
A ruthless king orders all maji killed in Orïsha, leaving seventeen-year-old Zélie motherless and alone. But as Zélie begins to discover her own power, she has the chance to free those descendants of maji called diviners—dark-skinned people with white hair—from oppression. But to do so, she must outrun the crown prince who is determined to finish what his father the king began.

Inkmistress by Audrey Coulthurst. 9780062433282. 2018. Gr 9-12.
Demigod Asra can dictate the future with her blood. To hide this power, she lives as a healer on a remote mountain with Ina, the mortal girl she loves. When bandits attack Ina’s village and kill her parents, Asra’s blood magic goes wrong, and the bandits to destroy the town. Now Ina swears revenge against the king who refused to help, using a savage dragon as her manifest. To stop her wrath, Asra leaves the mountain, becoming a player in a larger game of power.

Live in Infamy by Caroline Tung Richmond. 9781338111095. 2018. Gr 9-12.
Eighty years ago, the Axis powers won World War II with genetically engineered super soldiers. Imperial Japan now rules the Western American Territories with an iron fist, and Chinese American Ren Cabot has lost everything, including his mother who was publicly executed for treason. Ren is under constant surveillance, but when he meets a resistance group, he sees an opportunity to topple the oppressive regime, despite the dangers.

The Price Guide to the Occult by Leslye Walton. 9780763691103. 2018. Gr 9-12.
One hundred years ago, Rona Blackburn landed on Anathema Island. Her neighbors, suspicious of her unearthly skills, thought her a witch and turned on her; as a result, Rona cursed the island. Eight generations later, Nor Blackburn is trying to just be a normal teen. But her supernatural powers are exceptional. When her abusive mother Fern, a powerful witch, begins to use black magic, Nor may be the island’s only hope.

The Wicked Deep by Shea Ernshaw. 9781481497343. 2018. Gr 9-12.
Two centuries ago in the town of Sparrow, Oregon, three sisters were executed as witches. They return each summer to exact revenge on the small town, stealing the bodies of three girls and luring boys to their deaths. Seventeen-year-old Penny is resigned to the fate of the town—until Bo Carter arrives. Now Penny must find a way to stop the witch sisters and save the boy she loves.

The Broken Girls by Simone St. James. 9780451476203. 2018. Gr 11-Adult.
In Vermont, 1950, Idlewild Hall is a boarding school for unwanted girls. Four roommates become close friends and try to deal with rumors that the school is haunted by Mary Hand, whose dead body is buried in the garden. Then one of the girls disappears, her body found near the Hall. Twenty years later, Fiona Sheridan is convinced that there was something horribly wrong about Idlewild and is determined to find the truth about her sister’s murder.

Glimpse by Jonathan Maberry. 9781250065261. 2018. Gr 11-Adult.
Former addict Rain Thomas can’t shake her remorse for giving up her baby when she was 16, after learning that the baby’s father had died in Iraq. On her way to a job interview, she borrows a pair of reading glasses, and through a small crack in one lens sees a boy running down the aisle of a subway car, screaming. Without the glasses, she sees no boy. She begins hearing voices and her day gets even stranger. Worried that she might be going insane, Rain begins questioning what is real and what is a nightmare.

The Queens of Innis Lear by Tessa Gratton. 9780765392466. 2018. Gr 11-Adult.
In this reimagining of King Lear, the king divides his island kingdom between his two older daughters, throwing the court into chaos. The youngest, Elia, though stripped of her title and her dowry, tries to unite the kingdom. 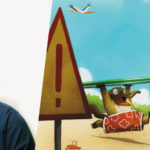