Why Snow White?: A Guest Post by Matt Phelan

Matt Phelan’s newest book, Snow White: A Graphic Novel, takes an old story and re-imagines it with an early twentieth century back drop. The result is an atmospheric tale that will be perfect for fans of historical fiction, fairy tale adaptations, and, of course, graphic novels.

But why another version of the Snow White story? Matt Phelan shares his inspiration for the book in this guest post. 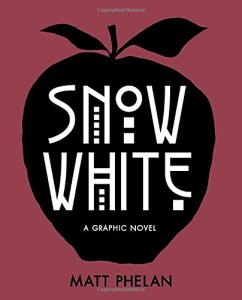 Why Snow White? This is the question that I needed to ask myself when I started work on my fourth graphic novel. Does the world need yet another version of this famous tale? Why take this on?

Inspired by a random connection my brain made between the apple peddlers of the Depression and the poisoned apple, the germ of the idea started almost as a game. If this story is set in this time, then how does that change it? Who is the Queen? The Queen of the Ziegfeld Follies. Who is the King? The King of Wall Street. The huntsman became a hit man. The Seven Dwarves became seven street boys, maybe orphans, maybe runaways. They guard their names at all costs. They roam the alleys and shadows keeping to themselves… and on occasion helping someone in trouble.

This was all well and good. I was having fun. But I needed to go deeper. The Seven were a signpost. There was something to their plight. I began to care about these characters. It was no longer a purely intellectual enterprise. I was digging deeper, delving into the emotional core of the story, or at least my version of it.

I had to find the reason why this particular tale was calling me. Why was I drawn to this? 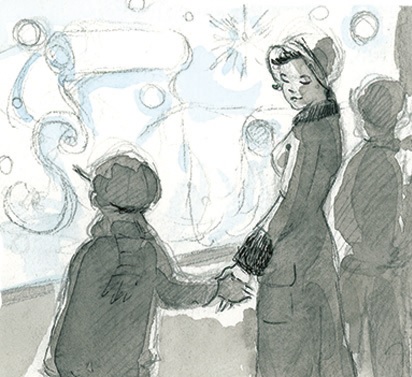 The key was Snow White herself, who in my version is a young girl named Samantha. Her late mother nicknamed her Snow because she believed that the snow covers everything and makes the whole world beautiful. Despite the sadness in her life, Snow remains an optimist. She knows first-hand of the danger and ugliness of the world, yet she holds fast to the belief that there is beauty in the world still. That belief, that goodness, is what I think resonates with Mr. Hunt and the Seven. And me.

Snow is a good person. She believes in the goodness of people. She believes that no matter what, there is beauty in the world. There are ultimately more good people in the world than bad, and good will—and does—triumph over evil.

This idea is, sadly, very timely. It is also timeless. It’s what I believe, and it’s the reason I made my version of Snow White.

About the Author: Matt Phelan is the author-illustrator of three previous graphic novels: the Scott O’Dell Award–winning The Storm in the Barn, Around the World, and Bluffton, which was nominated for three Will Eisner Comic Industry Awards, including Best Graphic Album. He is the author-illustrator of Druthers and the illustrator of many books for young readers, including Marilyn’s Monster by Michelle Knudsen and The Higher Power of Lucky by Susan Patron, winner of the Newbery Medal. Matt Phelan lives in Pennsylvania.

About the Book: The scene: New York City. The dazzling lights cast shadows that grow ever darker as the glitzy prosperity of the Roaring Twenties screeches to a halt. Enter a cast of familiar characters: a young girl, Samantha White, returning after being sent away by her cruel stepmother, the Queen of the Follies, years earlier; her father, the King of Wall Street, who survives the stock market crash only to suffer a strange and sudden death; seven street urchins, brave protectors for a girl as pure as snow; and a mysterious stock ticker that holds the stepmother in its thrall, churning out ticker tape imprinted with the wicked words “Another . . . More Beautiful . . . KILL.” In a moody, cinematic new telling of a beloved fairy tale, extraordinary graphic novelist Matt Phelan captures the essence of classic film noir on the page—and draws a striking distinction between good and evil.

Books in Bloom Guest Posts
Why Snow White?: A Guest Post by Matt Phelan2016-12-122019-06-28https://www.mackincommunity.com/wp-content/uploads/2018/06/mackin-community-header-logo.pngMackin Communityhttps://www.mackincommunity.com/wp-content/uploads/2018/05/bg-books.jpg200px200px
About
Mackin Books in Bloom
Books in Bloom is a showcase of the writing and creative talents of our staff librarians. Articles feature titles, themes, and strategies to help educators. Guest authors (from picture books up to YA) even stop by to talk about their newest titles and the process behind them. Books in Bloom is a great (and fun!) tool for librarians and educators to help improve their collections. 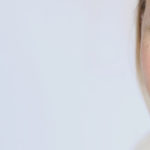 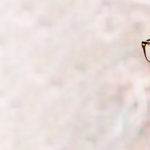