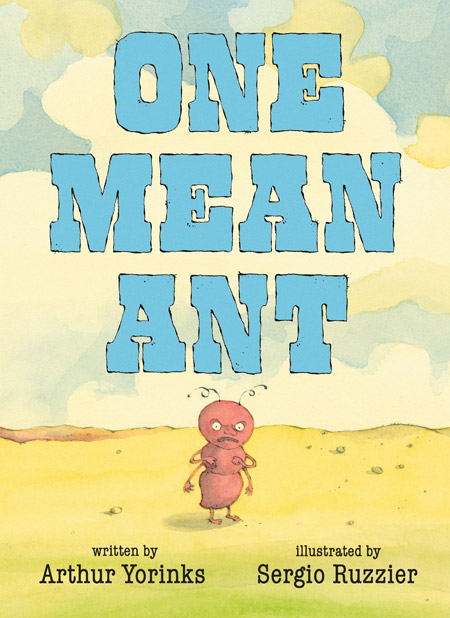 “Once there was an ant. A really mean ant.” So begins the newest book from author Arthur Yorinks and illustrator Sergio Ruzzier entitled One Mean Ant (Candlewick Press, 2020) that follows a mean ant as he learns how to be a friend.

“I’m drawn to references, literary and otherwise,” shares Yorinks about the idea that started this book. “My book Louis the Fish (Square Fish, 1986) was drawn from my love of the works of Kafka. My book It Happened in Pinsk (Farrar Straus & Giroux, 1983) was drawn from my love of the works of Gogol. And in the instance of One Mean Ant, I turned to Beckett (“Waiting for Godot”) and, at the risk of being a bit esoteric, “No Exit” by Sartre—both are plays. I’m currently in playwriting mode. One Mean Ant is a book about friendship, and I thought about how, in some ways, we’re alone in the world and what it means to have a friend. Though One Mean Ant is about friendship, I presume and hope there are all sorts of things the reader will come away with from reading the book based on their own lives and experiences.”

Yorinks, an award-winning author, playwright, and director, is no stranger to the world of children’s books. Having written more than 35 picture books for children, Yorinks knows the process inside and out. Yet, this book seemed to be in the works longer than most. “It seemed like this book took forever to be published. I wrote the story many years ago—can’t remember exactly when right at this moment—but between finding the right illustrator, and fitting work into his schedule, and all the ‘stuff’ of producing a book, well, let’s put it this way, the young boy I dedicated it to is now in college! Just kidding, but he was in preschool and now he’s just about past the age of picture books.”

One of the challenges Yorinks faced was finding just the right illustrator for One Mean Ant. “I have been known to have strong opinions about illustrators and naturally who I might collaborate with on a book. I did not know Sergio’s work (and to be clear, I have not kept up on the current crop of illustrators working now), but my editor Liz, after some discussion about other possibilities, came up with the idea of Sergio Ruzzier. And it was fateful for I had just met Sergio through the folks at The Maurice Sendak Foundation. I then looked carefully at his work, and I felt he might be able to handle what is a very significant challenge of the manuscript—no people, only insects who don’t do much but TALK!” 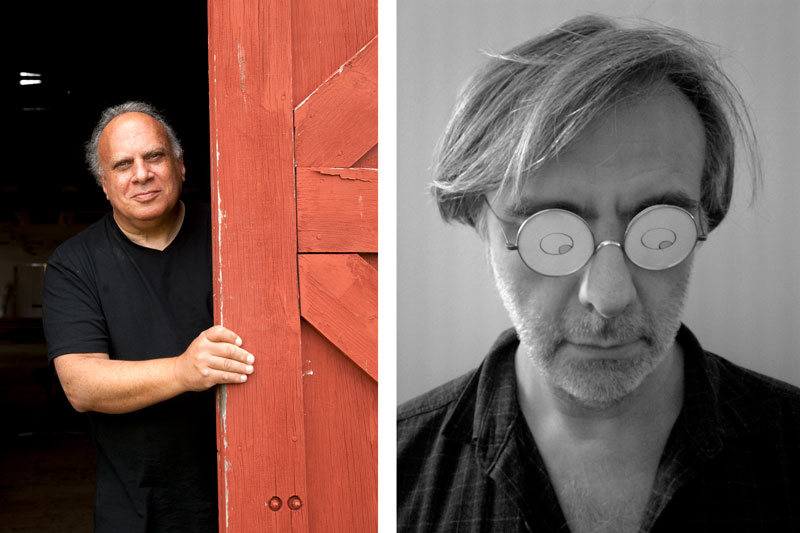 Though Yorinks was unfamiliar with Sergio Ruzzier, an award-winning children’s book author and illustrator, the opposite was completely untrue. Ruzzier knew Yorinks’ work and was ready to work with him from the start. “When I was asked to consider Arthur’s manuscript, I was already thrilled even before reading it,” says Ruzzier. “I knew a lot of his previous work, and I don’t think he ever wrote anything that was not good. I really loved the challenge of following two little bugs who just talk for the whole book, and in the middle of a desert, on top of that.”

“I love the feeling of working on my own idea and being able to create a whole book by myself. But being given another writer’s manuscript puts you in a very different place, one where you can interpret, extemporize, even misunderstand the text and build something completely unique and unexpected.”

The two men began talking about the project and how to make it work. “I thought that the book should have 48 pages instead of the usual 32 or 40,” Ruzzier admits. “Not having too many elements to work with, I had to make the best of expressions, body language, and skies. While painting, I’m afraid I went too far with my crazy skies, and in some of the spreads, I didn’t leave enough room for the words. I had to fix that afterward.” 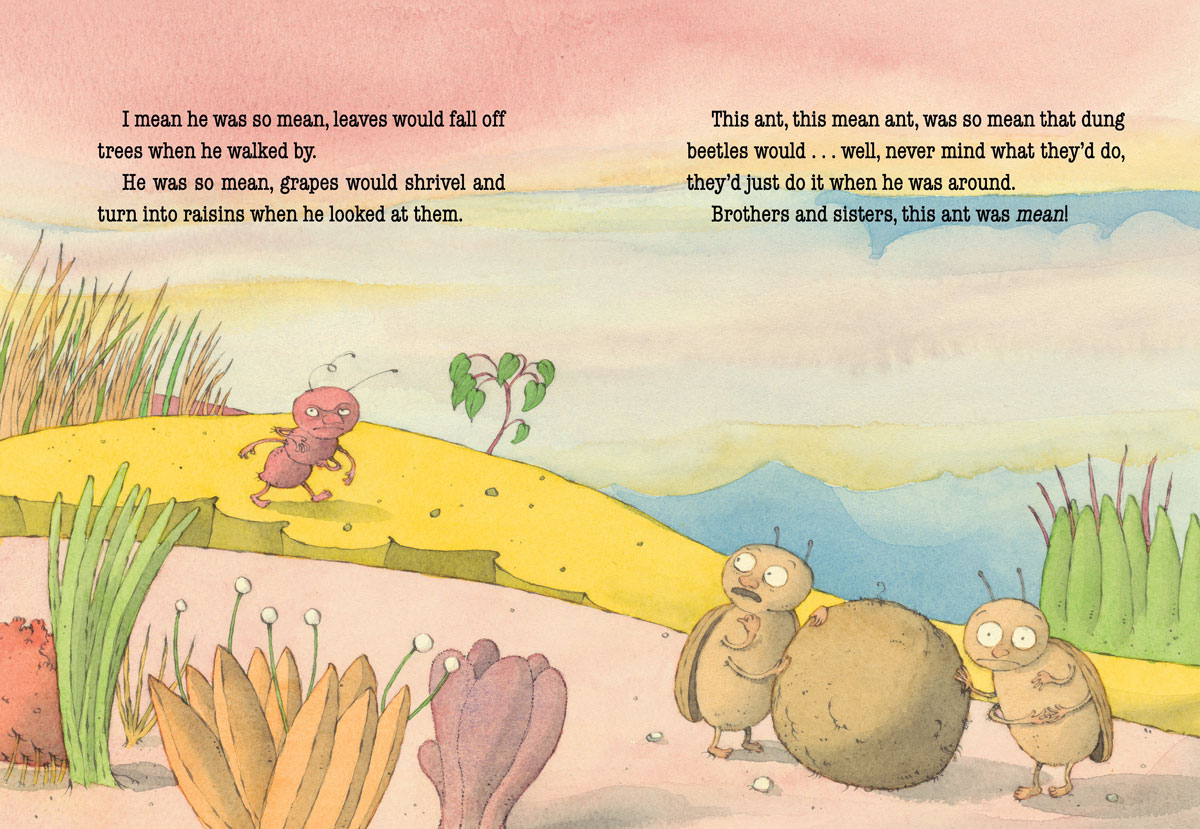 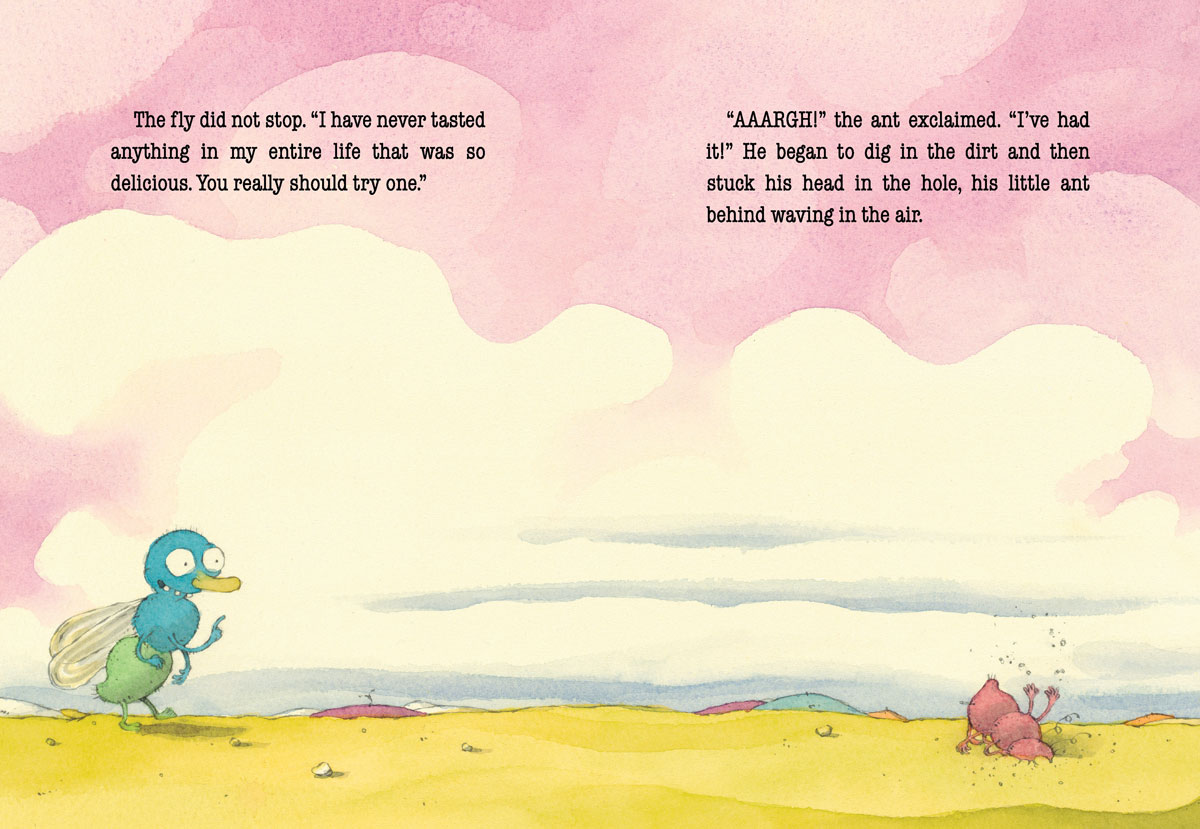 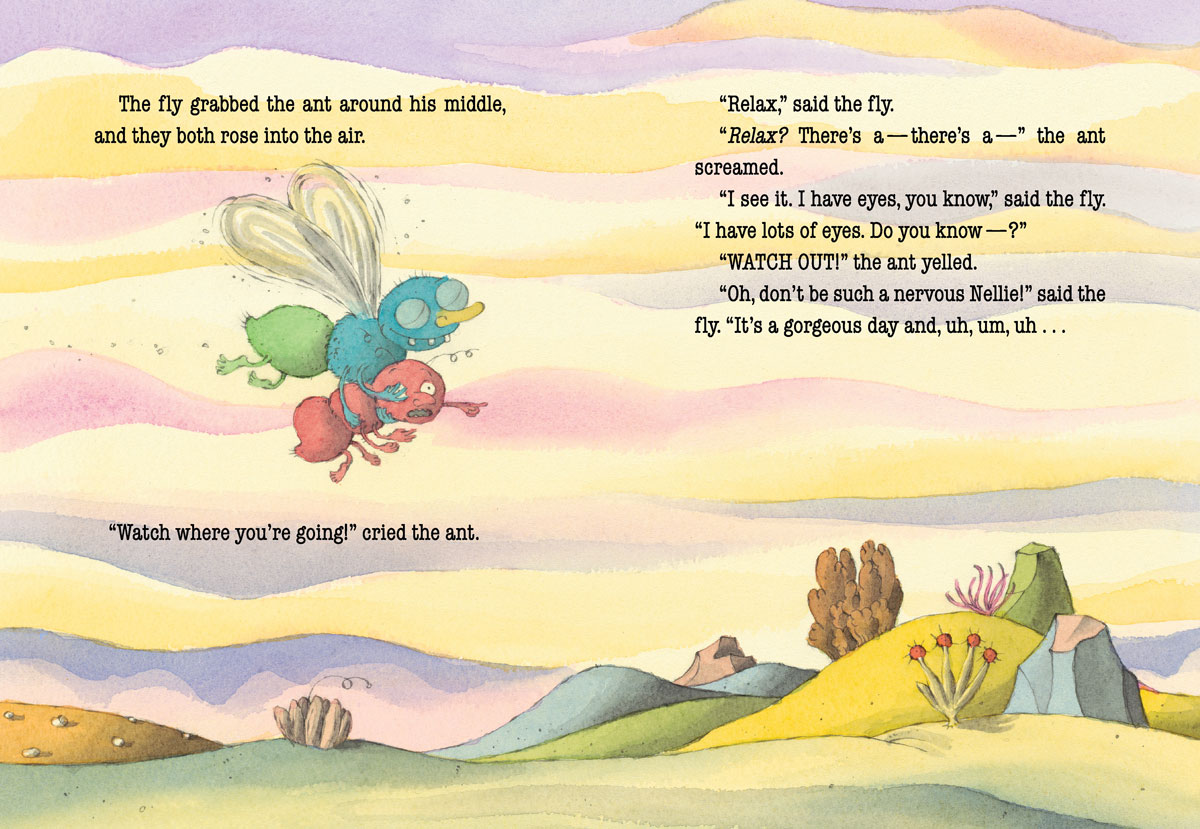 Yorinks, though, did not seem to mind Ruzzier’s “crazy skies” and such. “Sergio was brilliant in capturing the very essence of being alone in the desert and giving character to tiny generic insects.”

One Mean Ant makes its official debut in February 2020. The first in a trilogy, readers and fans of this humorous picture book can look forward to additional volumes following the adventures of the cantankerous ant. “One Mean Ant will return in the fall with the second book, One Mean Ant With Fly and Flea,” Yorinks states. “And the third book, I hope and presume, will be around in the spring of 2021.”

“The notion that children can’t handle anything but cheerful, happy endings is not only antiquated but just plain wrong. Children have all sorts of experiences in their real lives, not all of them of course ‘cheery,’ and part of growing up is how one learns to deal with life.”

Yorinks and Ruzzier have plenty of other projects in the works, too. “I’m working on a new picture book manuscript, but much too early to tell if it will be something,” says Yorinks. “And I’m quite busy with the other side of my life—playwriting. I’m finishing a script now (an adult play, not for children) as well as beginning to workshop a play I wrote for the 9/11 Memorial Museum in New York, which I hope will find a home. It’s for all ages. And yes, other things are in the works; I keep busy.”

As for Ruzzier, he says, “I just delivered the art for the second book with the mean ant and his ‘friend’ the fly (and another little guy). And then there will be a third one. Right now I’m working on my own third book of the Fox+Chick (Chronicle Books) series.”

Where the Wild Things Are 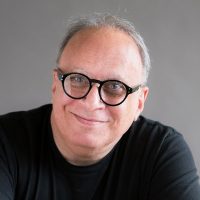 Arthur Yorinks was selected as the playwright to create the first full-length adaptation of Maurice Sendak’s classic children’s book, Where the Wild Things Are (Harper & Row, 1963). “It was a great honor to tackle this Mt. Everest of adaptations,” shares Yorinks, who was friends with Sendak for 40 years. “My goal was to somehow create something that would, in the end, seem like Maurice had written it. I finished the script last year. The production will premiere in New York City, at the New Victory Theater on 42nd Street, in the fall of 2021. We are just beginning the development phase of it—working with the directors (it’s a trio) to figure out how to put it up on stage. It’s very exciting.”

Learning to Draw by the Books 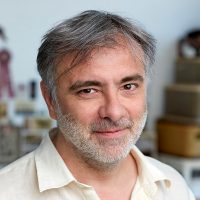 Sergio Ruzzier describes notable influences on his art. “The Little Bear (HarperCollins) books were among my very first books, which I had in the Italian edition, of course. I learned to read with them, and later I used Sendak’s drawings as a model for my first pen-and-ink attempts. So, I am sure something must have stayed with me of that beautiful, tender, melancholic atmosphere. The Frog and Toad (Harper & Row) books, which I only discovered as an adult, like the rest of Arnold Lobel’s work, are among the very best literature I’ve ever read. Etienne Delessert is not as known as he should be; his paintings are uniquely haunting and his colors enchanting. I collect his books with passion. I am also a huge admirer of Art Spiegelman‘s Maus (Pantheon, 1986). I wish I could write something as powerful and moving as that book.” 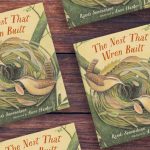 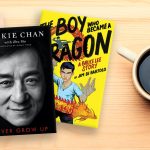