Who would have thought that a fourth-grade boy who traced comic strips from the newspaper would one day create wildly popular graphic novels about cats in space, and a picture book about a little monster hungry for a hot dog? Probably not many, but in fifth grade, Drew Brockington decided he wanted to be a cartoonist and today he is the author and illustrator of the graphic novel series, CatStronauts (Little, Brown Books for Young Readers, 2017), and has a new picture book, Hangry (Little, Brown Books for Young Readers), released this month.

“Previously (in 4th grade) I wanted to be an airline pilot, but I had pretty bad vision, and a lot of people told me that you needed 20/20 to become a pilot,” shares Brockington, “so since I liked drawing, a cartoonist was a pretty good fall-back career. I read Calvin and Hobbes religiously in the newspaper, and went through a phase where I would use tracing paper, copying down full strips. Soon enough, I began making my own small comic strips without the aid of tracing paper. My first character was called Kid Kicker, a kid who knew 1,000 different kinds of kicks. Is the door locked? Kid Kicker knows how to kick it open. Is the car with the treasure getting away? Kid Kicker could kick a ball and bounce it off the hood to make the car stop. It was pretty silly.”

Brockington graduated with a degree in art and art history from Kalamazoo College. Shortly after graduation, he worked for the famous environmental artist duo Christo and Jeanne-Claude on “The Gates” installation. After that project, he worked as a graphic designer creating corporate logos and stationery before publishing his first book. He currently works from his home-based studio in Minneapolis, Minnesota. 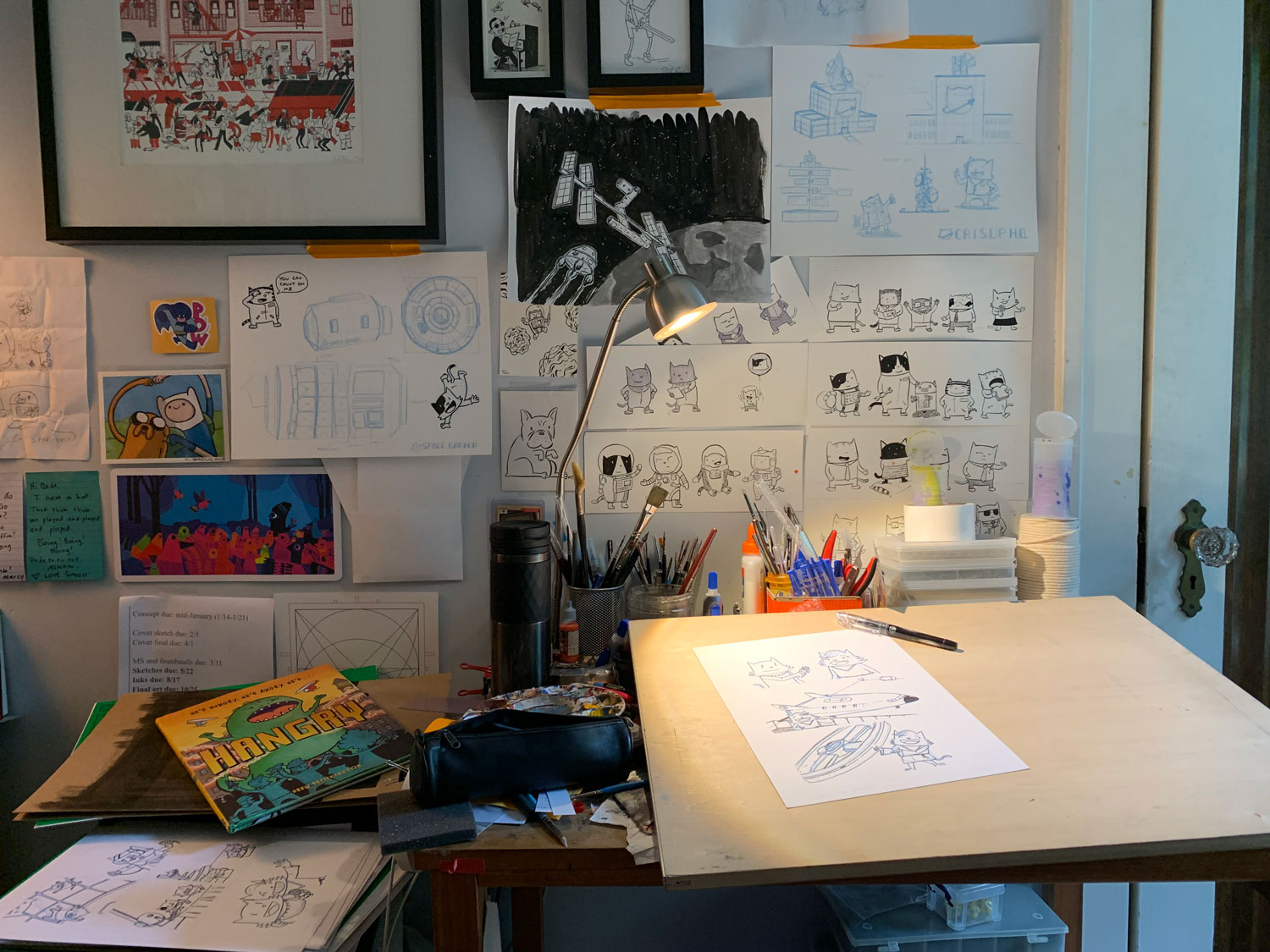 Drew Draws Out the Details

“Once I have an inspiration, I write out a single-page synopsis for the book. Then I walk through and try to break up the synopsis into chapter chunks, writing out a short description for what would happen in each of the chapters.

When I sit down to write out the manuscript, I grab a chapter and write the dialogue at the same time as the descriptions for what happens in each panel on the comic page. As I write, I’m also sketching how I want the panels to look on each page. This gives me an idea of how the visual pacing of the story is happening throughout the book as I write.

With revising comics, for me, it’s always taking out words. Because the words and the illustrations have to be balanced on the page, I’ll often be tweaking that balance up until the last minute. ‘Is there a way I can re-word this sentence of dialogue to be two lines, instead of three, so that I can have a smaller word bubble and show more artwork?’ That is my mantra.”

“I don’t think I could survive as an author/illustrator without my previous career as a graphic designer. Managing clients, vendors, other designers, as well as my own schedule has really taught me the self-discipline required for meeting a deadline. I always thought working for myself meant that I could ‘make my own schedule’ and go watch a movie during the day or goof off more. But the reality is that a deadline is always looming. Anything you don’t do now will have to be made up later. I keep a very rigid work schedule to make sure that I can complete a 150-page artwork in less than a year. And it’s not just work ethic. My design and arts background has also given me knowledge about composition, book design, color palettes, even the ability to custom-make fonts for some of my characters.”

“I saw on Twitter that one teacher used Mission Moon for a whole segment in class. The book was used for inspiration in each subject. They made their own graphic novels, built rockets, calculated the distance they flew in their flights, and many more activities. It was very awesome to see how a single story can be used in so many different ways.” 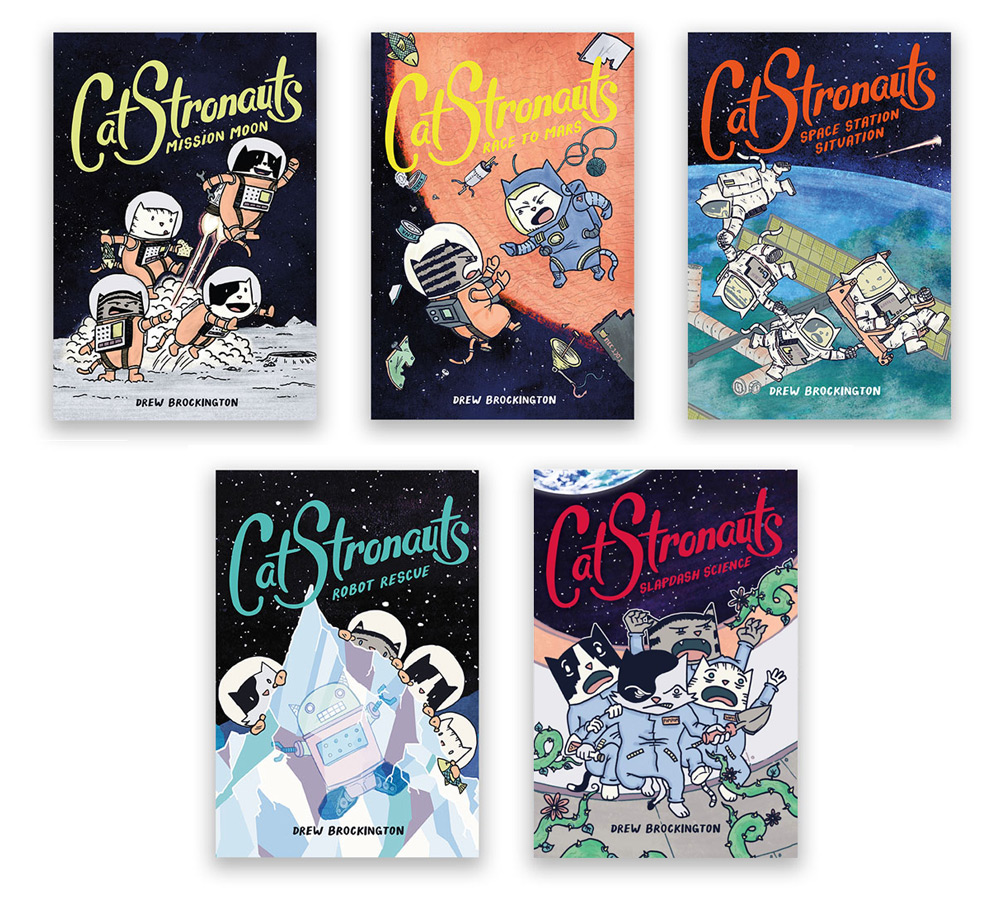 “The CatStronauts stories are always inspired by actual NASA missions, experiments, or theories related to the study of space,” says Brockington. “For the third book, Space Station Situation, I looked at two missions in particular, the Hubble telescope in the 90s and the possible Asteroid Redirect mission. From the Hubble, I really liked the concept of giving the CatStronauts a bright new shiny instrument, but when you finally go to use it for the first time, it’s broken and you have to fix it. And from the Asteroid Redirect, I loved the idea of physically changing the direction of an object that’s been on the same trajectory for who knows how long.”

“Puns are a family tradition in my house! Many family dinners were spent trying to out-pun each other, and I never shy away from using one whenever possible. But they are often the hardest things to write into the story. A lot of time, I’ll highlight the spots in my manuscript where I need to insert a joke or a pun. A lot of the best joke ideas come while I’m doing something else, like drawing or cooking. When my mind wanders, that’s usually when the best ideas occur.” 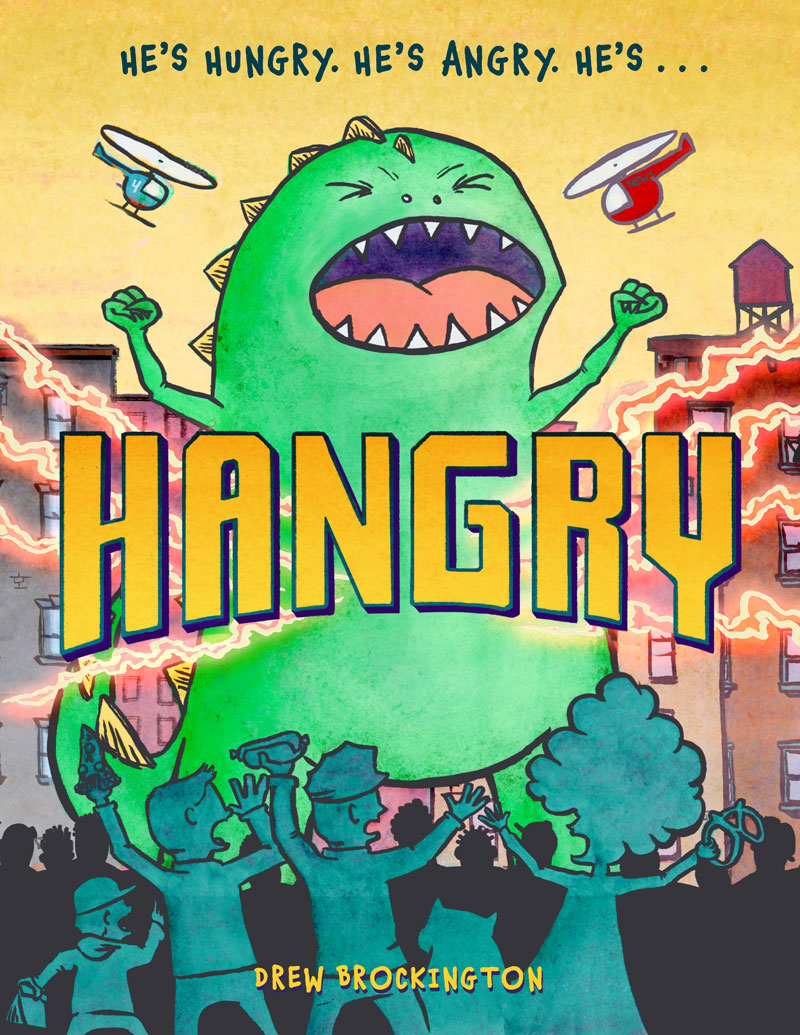 This year Brockington is branching out from graphic novels and adding a picture book to his repertoire. Hangry features a hungry little monster who becomes angry in his failed efforts to locate the “best ever” hot dog. As it turns out, Hangry is based on reality just like his CatStronauts books.

“Hangry started as a doodle in my sketchbook about a little monster that was begging a hot dog vendor for a hot dog. Thanks to observing my family of twin toddlers at 7:30 am, I had some firsthand experience of little people becoming hangry monsters if breakfast was served late. Eventually my sketchbook doodles started reflecting my kids’ own emotions.”

In addition to Hangry making its debut this summer, Brockington’s fifth CatStronauts book will be published in August. And next year comes the sixth installment of the CatStronauts’ adventures. “After that, I have a new, non-CatStronauts graphic novel project that I’m working on as well as finishing up some other picture book ideas.” Brockington also makes in-person and virtual school visits. 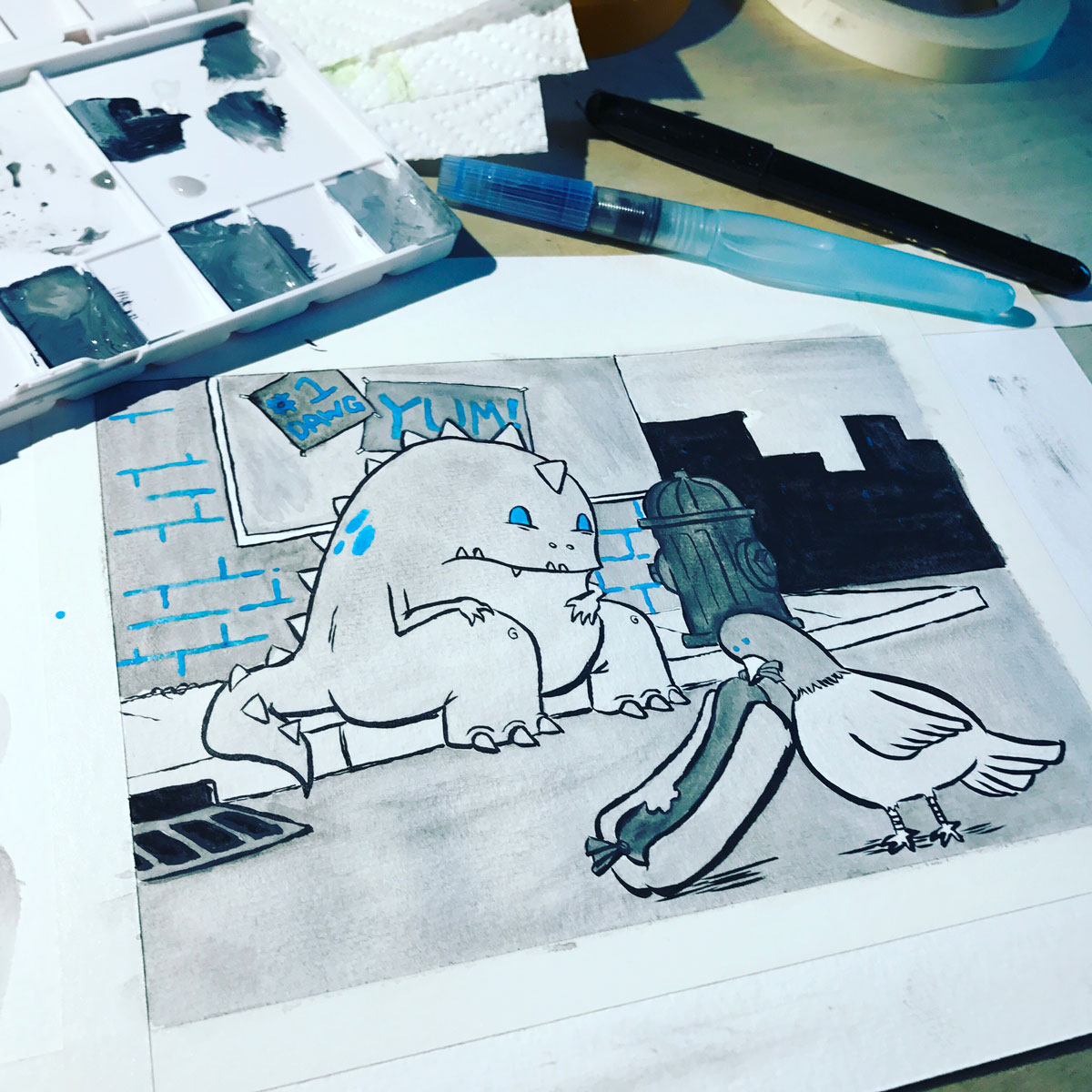 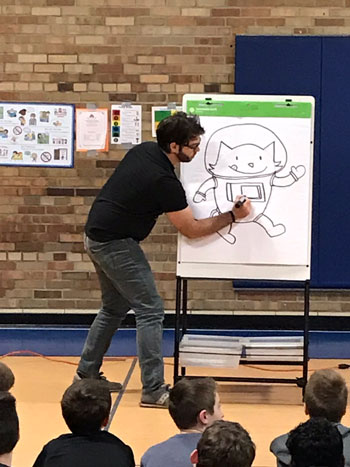 “I learned an exercise from fellow children’s illustrator Kelly Light that I love using with students. Make six random shapes on a piece of paper. Now look at those shapes as if they were heads, and add in the eyes, ears, hair, glasses, etc. Chose your favorite of those shapes and try drawing it again on a new sheet of paper. Now try drawing that head with a happy expression, and again with a sad expression. Every time you draw a new version of your head, answer the question ‘Why is this character happy?’ or ‘Why is this character sad?’ At some point, draw a body for your head. Eventually you’ll have a nice character study and you’ll know a lot about your character.”

Brockington can be contacted through his website and social media accounts, but he cautions fans against hoping for speedy replies. “I do try to answer fan mail, but I’m really slow to answer.” 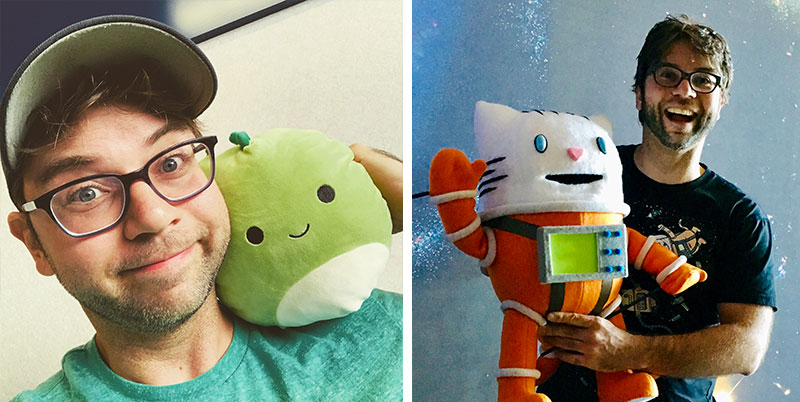 Drew Brockington with his characters, Hangry and Waffles. 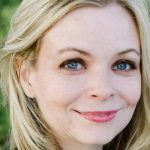 On Fear and Author Visits: A Guest Post by S.J. KincaidBooks in Bloom 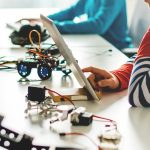