On Fear and Author Visits: A Guest Post by S.J. Kincaid

We love hearing about authors in schools. It is always so exciting to hear about kids getting excited to meet the people behind the books and about the general enthusiasm for reading that follows such visits. In our author/illustrator guest post series, we have had some great insights and stories about author visits to schools. Matt Tavares shared a sweet story about connecting with a young student at a school visit many years ago, and Aaron Reynolds offered tips for making author visits unforgettable for your students. But not every author is jumping to visit a school.

In this guest post, YA author S.J. Kincaid confesses her initial reluctance to do school visits and what changed for her. 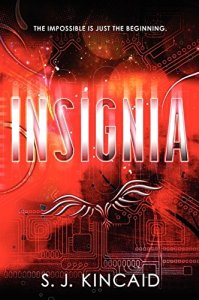 I recently had an author event where I was the most ‘senior’ author there, with mostly debuts. As a consequence, I felt very wise and Yoda-like. Our conversation veered to the topic of school visits, and an author told me she’d turned down the chance to do them because she was too scared. Another author agreed.

I began to reassure them about how fun they were—and then I remembered something: I was once terrified of school visits. It’s strange to me to think on that now, but when I filled out my first publicity questionnaire for my debut, Insignia, I vehemently checked ‘no’ when asked whether I wanted to go to schools.

There was a simple reason for my fear: I vividly remembered the person I’d been in high school. The association of high school with emotional turmoil overwhelmed my conscious knowledge that I was twenty-nine, and therefore a long way from “high school” Shelley. I was so glad when high school ended that I fled my graduation as soon as my parents would allow me to leave.

So, that ‘no’ was definite. Firm. Certain.

Then my first school visit crept up on me.

My friend’s mother worked at a nearby high school. She invited me herself. The school was ten minutes away, the date of the event was months away, and she was so happy to arrange it that I didn’t feel I could refuse.

It was so many months away, I put it out of my mind.

But then those months disappeared.

Soon it was a week away. Then five days. Then three. I was still avoiding the thought of the impending school visit.

Then it was the night before.

That’s when the terror crashed over me. I was going to go into a school. I was going to talk to two assemblies of 500 kids each. For forty-five minutes. Why had I agreed to this? What was I thinking? As I always do when dreading an inevitable task, I delayed drawing up notecards for the speech until the last minute (just the sort of procrastination I always did in high school, in fact). I didn’t practice enough. I knew my speech would be awful.

The day came. I did not crash my car on the way to the school. I’d had an odd certainty that might happen, but it didn’t. I feared other calamities. I didn’t know what they were, but I was sure they would happen. They did not. I arrived an hour early because I was sure I’d get lost and then there’d be no parking. I did not get lost, and there were tons of open spaces.

I walked into the school in a haze of terror. Then I glimpsed my own author picture on the wall. Next to it was the previous year’s author: Jay Asher.

I had never met Jay Asher (though I have met him now—great guy.) I did know him in a sense, though, because when I was an aspiring wannabe author, I reread his post on a message board every so often. It was written when he was an aspiring wannabe author, and in it, he declared his intention to quit. He’d been rejected so many times, he’d finally accepted the fact that he’d never sell a book.

Then came his follow-up post: he’d sold Thirteen Reasons Why.

My road to publication spanned three agents, seven books, many jobs and most of nursing school. It was an incredibly long and frustrating period and I found myself tempted to quit over and over again. Stories like Jay Asher’s had inspired me to keep trying. In fact, the speech I planned to deliver focused upon that very journey.

I meant to speak of trying and failing, and trying and failing so many times. I would tell them of the way I was one week away from graduating nursing school, and fully intending to throw in the towel so I could focus on my new career, when an editor made an offer for “Insignia”.

When I’d planned the speech, I had Jay Asher’s post in mind. I thought of how much that post encouraged me; I hoped I could do that for someone else. To walk into the school and see Jay Asher’s picture there? It was just the most bizarre coincidence, and the surprise entirely disrupted that spiral of anxiety. Suddenly, I was calm.

I entered the auditorium. I stood in the front of a room filling with 500 kids. That’s a big number, and yet the crowd did not look so dauntingly huge to me. In fact, the kids I saw looked so much younger than I expected. Smaller, even.

And a strange thing happened: I looked at these kids and realized they were kids, and I was an adult—and those anguished high school memories were suddenly recollections of childhood. Their power receded as they took a place in my mind alongside Girl Scouts, learning to ride a bike, soccer camp… It was another era and I was long past it.

I gave my speech and it wasn’t hard. I maybe said ‘uh’ a few too many times, but otherwise? It was great. The next run was easy. I’d done it once before. 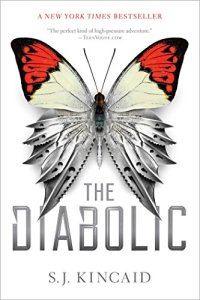 Since that first school visit, I’ve had no fear of them, and I’ve refined, adjusted, and appended to the general speech as needed. The most recent school visit, I didn’t even need to look at note cards, I just went off the top of my head, and it was the best one yet. I’ve been in so many states, at so many different types of schools, speaking to different types of groups in this incredible variety of experiences. Soon, I will have an amazing new visit like none I’ve had before: to a school in Germany.

When I think of the way my knee-jerk fear nearly deprived me of all of this, well… It inspires me to buy my friend’s mother a box of German chocolates.

About the Author: S.J. Kincaid originally wanted to be an astronaut, but a dearth of mathematical skills turned her interest to science fiction instead. Her debut novel, Insignia, was shortlisted for the Waterstones prize. Its sequels, Vortex and Catalyst, have received starred reviews from Kirkus Reviews and Booklist. She’s chronically restless and has lived in California, Alabama, New Hampshire, Oregon, Chicago, and Scotland with no signs of staying in one place anytime soon.

Books in Bloom Guest Posts
On Fear and Author Visits: A Guest Post by S.J. Kincaid2019-06-172019-06-28https://www.mackincommunity.com/wp-content/uploads/2018/06/mackin-community-header-logo.pngMackin Communityhttps://www.mackincommunity.com/wp-content/uploads/2019/06/s.j.kincaid.jpg200px200px
About
Mackin Books in Bloom
Books in Bloom is a showcase of the writing and creative talents of our staff librarians. Articles feature titles, themes, and strategies to help educators. Guest authors (from picture books up to YA) even stop by to talk about their newest titles and the process behind them. Books in Bloom is a great (and fun!) tool for librarians and educators to help improve their collections. 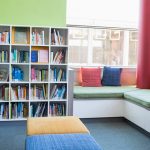 School Librarians Can Save DemocracyLibrary 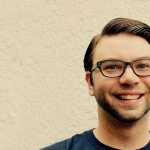