Take a look at these exciting nonfiction titles published in March. Enjoy and learn!

An Extraordinary Ordinary Moth by Karlin Gray (ill. by Steliyana Doneva). 9781585363728. 2018. Gr PK-2.
A gray moth compares itself unfavorably to relatives such as the Luna Moth and Hummingbird Moth, especially when a little girl finds it disgusting—until her older brother tells her what he finds fascinating about moths.

The Flying Girl : How Aide de Acosta Learned to Soar by Margarita Engle (ill. by Sara Palaelos). 9781481445023. 2018. Gr PK-2.
Aida de Acosta was the first woman to fly a motorized aircraft, and she did so months before the Wright brothers and their airplane.

Gloria’s Voice : The Story of Gloria Steinem—Feminist, Activist, Leader by Aura Lewis. 9781454926665. 2018. Gr PK-2.
This picture book biography relates how the pioneering feminist came by her beliefs and how she faced the many obstacles against women’s rights.

Joan Procter, Dragon Doctor : The Woman Who Loved Reptiles by Patricia Valdez (ill. by Felicita Sala). 9780399557255. 2018. Gr PK-3.
From a very young age, Joan Procter, a pioneering scientist, loved reptiles. As an adult she became the Curator of Reptiles at the British Museum and later designed the Reptile House at the London Zoo, even hosting tea parties for children alongside a Komodo dragon.

The Seal Garden (My Great Bear Rainforest) by Ian McAllister & Nicholas Read. 9781459812673. 2018. Gr K-3.
In the Great Bear Sea off Canada’s west coast, seal gardens provide shelter to sea lions and otters, as well as many kinds of seals and sea mammals.

She Persisted Around the World : 13 Women Who Changed History by Chelsea Clinton (ill. by Alexandra Boiger). 9780525516996. 2018. Gr K-2. (Spanish: Ella Persistio Alrededor del Mundo : 13 mujeres que cambiaron la historia, 9780525517023).
She Persisted moves across time and the globe to showcase women who have ignored those who told them that they couldn’t follow their dreams and have changed the world.

With My Hands : Poems About Making Things by Amy Ludwig VanDerwater (ill. by Lou Fancher & Steve Johnson). 9780544313408. 2018. Gr PK-3.
The creators of this book of poems encourages young people to draw, build, fold, and use their imaginations to create things with their hands. Illustrations show diverse children as well as overturn gender stereotypes.

The Creativity Project : An Awesometastic Story Collection edited by Colby Sharp. 9780316507813. 2018. Gr 4-6.
Colby Sharp asked more than forty authors and illustrators to create story starters using poems, draws, photos, and more. He then sent them to one of the other respondents, who created a story or poem or comic strip. Sharp selected some of the responses for this book, as well as including story starters for prompt students to write their own tales.

Five-Minute True Stories : Animal Rescue by Aubre Andrus. 9781338200065. 2018. Gr 1-4.
This collection relates the true stories of animals that were rescued from precarious situations, including handicapped pets as well as exotic wild animals.

Frenemies in the Family : Famous Brothers and Sisters Who Butted Heads and Had Each Other’s Backs by Kathleen Krull (ill. by Maple Lam). 9780399551246. 2018. Gr 4-6.
Some siblings get along and some fight like…well, like siblings. Read about 15 famous siblings whose relationships were characterized by rivalry, caring, illness, and devotion. The short stories are funny and illustrations are light-hearted, and comics present more information.

Meet My Family! : Animal Babies and Their Families by Laura Purdie Salas (ill. by Stephanie Fizer Coleman). 9781512425321. 2018. Gr 2-4.
Not all animal families are alike. More than 20 animal babies describe what they look like, who takes care of them, and where they live, often telling about how their families are similar to human ones.

Plant, Cook, Eat! : A Children’s Cookbook by Joe Archer & Caroline Craig. 9781580898171. 2018. Gr 2-5.
This garden-to-table guide for growing and eating sixteen different vegetables examines the seeds, soil, and reproduction of the plants, and offers recipes for once the vegetables are fully developed.

Super Cats : True Stories of Felines That Made History by Elizabeth MacLeod. 9781554519941. 2018. Gr 3-6.
Amazing but true facts (there are about 600 million pet cats in the world) illustrate the unique abilities of cats, as well as the role of cats in history and culture.)

Dog Days of History : The Incredible Story of Our Best Friends by Sarah Albee. 9781426329715. 2018. Gr 4-7.
Throughout history, dogs have been protectors, workers, soldiers, or just beloved pets. Learn about dogs in general—from wolves to the many breeds of today—as well as famous dogs of past and present.

Going Wild : Helping Nature Thrive in Cities (Footprints) by Michelle Mulder. 9781459812871. 2018. Gr 4-7.
Wild animals no longer live in just the wild any longer. As cities grow, more and more critters are learning how to live near houses, freeways, and factories, despite the enormous impact humans have had on the environment. Mulder explains how city planners can create spaces more in balance with nature, and what young readers can do to get involved in urban rewilding.

Science Comics : Robots & Drones : Past, Present & Future by Mairghread Scott & Jacob Chabot. 9781626727939. 2018. Gr 4-8.
This book in the Science Comics series offers an entertaining look at the history and future of robots, drones, and artificial intelligence.

Startalk : Young Readers Edition by Neil deGrasse Tyson. 9781426330872. 2018. Gr 6-9.
“StarTalk” host, Neil deGrasse Tyson and some of his favorite celebrity guests use photographs and scientific facts to attempt to answer a variety of relevant and irrelevant scientific questions from why we fall in love to if we should be afraid of the increasing use of artificial intelligence.

To the Moon! : The True Story of the American Heroes on the Apollo 8 Spaceship by Jeffrey Kluger. 9781524741013. 2018. Gr 5-8.
Apollo 8 was the first manned spaceship to leave Earth’s orbit and travel to the moon. In addition to this exciting journey, Kluger tells about the training of astronauts, the race to be the first country to put a man on the moon, and the problems of living in a spaceship for days (including going to the bathroom).

Voices from the Second World War : Stories of War as Told to Children of Today. 9780763694920. 2018. Gr 6-8.
Young people interviewed survivors of World War II and share the stories of pilots and sailors, resistance fighters, and people who survived the Holocaust and the bombing of Hiroshima. Many memoirs are accompanied by vintage photographs.

Brazen : Rebel Ladies Who Rocked the World by Penelope Bagieu. 9781626728684. 2018. Gr 7-12.
This collection of twenty-nine short graphic biographies includes some of the most inspiring women in history. Profiles such notable women as Joan of Arc, Florence Nightingale, Leyah Gbowee, and Peggy Guggenheim.

Claiming My Place : Coming of Age in the Shadow of the Holocaust by Planaria Price. 9780374305291. 2018. Gr 7-12.
Barbara Reichmann tells of growing up a Jew in Poland during the 1920s and 1930s, and what happened when the Nazis invaded the country. Reichmann and her friends and family suffered starvation, disease, and violent persecution; the establishment of the Jewish Ghetto; the relinquishment of all their possessions; and Reichmann’s decision to hide her Jewish identity, leave everything behind, and escape to a new life.

I Have the Right To : A High School Survivor’s Story of Sexism, Assault, Justice, and Hope by Chessy Prout. 9781534414433. 2018. Gr 9-12.
Chessy Prout discusses her sexual assault, her quest to find justice against her perpetrator, and her continued work as an advocate against sexual violence. After being assaulted as a freshman at a private boarding school, Chessy was subsequently bullied by students and faculty. She spoke up, took her assailant to court, and started a national campaign to help sexual abuse victims and change the culture of consent.

My Shot : Balancing It All and Standing Tall by Elena Delle Donne. 9781534412286. 2018. Gr 7-10.
Donne, a young basketball prodigy, relates the story of how she gave up an excellent scholarship in Connecticut so she could stay in her home state of Delaware to be near her disabled sister, Lizzie. She writes about overcoming the challenges of competitive sports with hard work and a supportive family.

The Young Champion’s Mind : How to Think, Train, and Thrive Like an Elite Athlete by Jim Afremow. 9781635650563. 2018. Gr 7-12.
In this young adult adaptation of his book The Champion’s Mind, Afremow draws from the lives of great athletes to offer lessons, advice, and strategies for developing confidence, focus, and mental preparedness.

Failing Up : How to Take Risks, Aim Higher, and Never Stop Learning by Leslie Odom, Jr. 9781250139962. 2018. Gr 7-12.
Odom has become famous after starring as Aaron Burr in the Broadway musical Hamilton. Here he tells personal stories of the hard work that he has put in as a singer and actor, and how he learned to motivate himself to reach for his goals, even in the face of disappointment.

Tomorrow Will Be Different : Love, Loss, and the Fight for Trans Equality by Sarah McBride. 9781524761479. 2018. Gr 10-Adult.
As the first transgender person to speak at a national political convention, Sarah McBride became an icon for the LGBTQ community. She details her personal journey of becoming an important political and cultural activist for trans rights.

We Matter : Athletes and Activism by Etan Thomas. 9781617755910. 2018. Gr 9-Adult.
Former basketball player, now a MSNBC commentator and activist, Etan Thomas interviewed dozens of athletes, media figures, and more on the subject of race in America. This collection of stories and opinions supports the right of athletes to speak out on matters of racial profiling, gender inequality, mental health issues. Thomas encourages fans as well as athletes to discuss these issues and get involved.

The Wisdom of Wolves : Lessons from the Sawtooth Pack by Jim & Jamie Dutcher. 9781426218866. 2018. Gr 11-Adult.
After spending six years in the Idaho wilderness with a pack of gray wolves, the authors describe the life lessons they have learned from the wolves on the importance of family, leading with kindness, working together, and respecting the elderly.

The Woman’s Hour : The Great Fight to Win the Vote by Elaine Weiss. 9780525429722. 2018. Gr 11-Adult.
In 1920, only one more state is need to ratify the Nineteenth Amendment and give women the right to vote—after 70 years of crusading. Weiss narrates the story of the battle in Tennessee between supporters of suffrage and their many opposing forces, and how the victory inspired those struggling against racial and gender injustice. 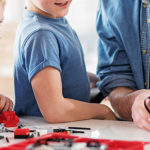 6 GREAT Makerspace Practices That You Need to SeeAdvocates, Experts, Makerspace