For someone who never even thought about becoming a writer until she was about 30 years old, Andrea Beaty’s books have been enjoyed and shared by countless readers around the globe and even in outer space. Yes, outer space! Beaty’s book, Rosie Revere, Engineer (Abrams Books for Young Readers, 2013), was an official selection of the Story Time From Space program.

“To see astronaut Kate Rubins read Rosie Revere, Engineer from the International Space Station is so far beyond my wildest dreams! It came about because I met astronaut Alvin Drew at the USA Science and Engineering Festival in D.C. I gave him a copy of Rosie Revere as a thank you for all he has done to help our country and the world via his work. He is actually one of the founders of Story Time From Space, and he shared the book with the others in the program. It’s a great program that shares videos of lots of books plus videos of astronauts performing experiments that can be done by classrooms and families as well. Combining literacy and space is a brilliant way to get kids excited about both!”

Beaty is no novice when it comes to combining literacy with science. As a child, she grew up in a house filled with books and spent much of her time reading and exploring the outdoors. “We didn’t have cable TV then and certainly not the Internet. So while I watched more than my fair share of TV, most of it was public television. Through PBS and wandering the fields and forests around my town, I learned about the natural world and grew to love science. Carl Sagan’s ‘Cosmos’ was a big influence on me and James Herriot’s All Things Great and Small series of books tipped the scales for me.”

“I was raised in a very small village of about 300 people. My father was a coal miner who was a big believer in education as a great equalizer and my mother was a voracious reader. I was a big reader as a kid and devoured Nancy Drew mysteries and Agatha Christie, and I wanted to be a spy or a detective!”

When it came time for Beaty to go to college, choosing her major was easy. “I studied biology and computer science which was a fairly new area of study back then. I loved them both. I didn’t really think about writing until many years later when I had kids and was reading picture books. They were so amazing compared to the bulk of books available when I was a kid. That set me on a whole new path and one that has been delightful!”

Beaty has written across genres but always seems to insert humor even in the most serious of books. “I don’t really think about writing different genres, I just write the book I have and explore the characters which intrigue me. I love humor and have been very pleased that it has worked in my writing. It’s a tricky thing to do. Mostly, I just write what cracks me up. Luckily, I am easily amused.”

In addition to having a knack for including humor in her writing, Beaty also has a talent for writing in verse. “I think of writing a rhyming book as writing a song. I use a dictionary, a book called a Flip Dictionary which helps find terminology on various topics, and a rhyming dictionary. Overall, though, rhyming does come naturally to me.”

Ten years ago, Beaty combined her love of science, writing, humor, and verse to unintentionally create the first of a series of STEM (Science, Technology, Engineering, Mathematics) books featuring students from Miss Lila Greer’s second-grade class. “I never set out to write STEM-related books or write books about specific careers. I wrote Iggy Peck, Architect (Abrams Books for Young Readers, 2007) because my son loved building things. I wanted to write a book that explored a kid’s consuming passion for something. So I think of that book as a book about passion.”

“I think that all kids are naturally creative and strong. They get so deeply pulled into their play and it becomes real to them. It is their work (as someone I can’t remember once famously said and which I famously just misquoted). Adults too often fail to give kids credit or think of their ideas as real or important. That annoys me. I find kids far more interesting than adults because for kids, anything is possible. I love that optimism and I think I share it, too.”

Teaming up with illustrator David Roberts, Beaty went on to write Rosie Revere, Engineer as well as Ada Twist, Scientist (Abrams Books for Young Readers, 2016). “I tried to figure out more about those kids from clues in David Roberts’ amazing illustrations in Iggy Peck. So I AM finally a detective after all! Rosie is about persistence, and Ada is about curiosity. They are coincidentally about engineering, science, and architecture, too, and that has been a lovely thing. We need books that can inspire kids to get interested in STEM because we have a lot of problems to conquer in the world that will need STEM-capable people to fix!”

So what is next? Will there be more books featuring students from Miss Greer’s class? “I don’t know if there will be a book for every kid in Miss Lila Greer’s class. I will write stories as the kids reveal their personalities to me and as long as it’s fun. My new book is Rosie Revere’s Big Project Book for Bold Engineers (Abrams Books for Young Readers, 2017). Iggy Peck will have a similar book in the fall. They are fun projects and all about brainstorming and getting creative about engineering and architecture. Also, we have created an initiative to help educators and parents help kids become more critical thinkers. To that end, we have created a series of posters to inspire kids to “Read. Question. Think.” They are available for a free download on my website.” 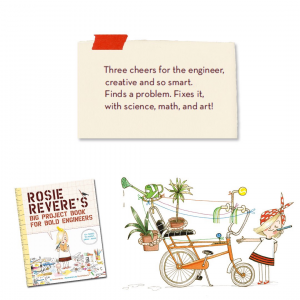 “Illustrator David Roberts is a magician and a wizard and a genius. He sneaks so many hidden gems into all his illustrations. He does it without telling anyone so it’s always a great treasure hunt when illustrations arrive at my door. I love it. I have found dozens of hidden connections among the books. Iggy’s parents make a cameo in Happy Birthday, Madame Chapeau (Abrams Books for Young Readers, 2014). Iggy’s cat shows up in Ada Twist, Scientist. All the hats in Madame Chapeau are based on real hats by famous designers and also ones that David designed. There’s more about that on my website.” 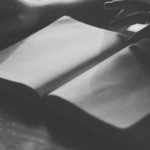