“I was a very reluctant reader,” confesses Chris Van Dusen, an award-winning author/illustrator of children’s books. “As a child, I would sit on my mom’s lap and she would read Dr. Seuss books, Robert McCloskey books, and all these other books to me. I would enjoy the stories, but I was really enthralled with the illustrations.” Those illustrations combined with an active imagination and parents who encouraged artistic endeavors are really what set Van Dusen on the path to becoming an illustrator.

“I was born in 1960, so we didn’t have all those screen distractions that kids have nowadays. On top of that, I have four brothers and we would go out and play. If the weather was not good, then all my brothers and I would just sit at the kitchen table and draw. We would look at each other’s drawings, compare them, and always try to do a bit better than each other.”

It wasn’t until Van Dusen read the original Chitty-Chitty-Bang-Bang that he discovered books—beyond their illustrations—could be interesting and reading could be for pleasure. “It was the first book I recall reading just for the fun of it—not because anyone said I had to read it. That was a life-changing experience for me because I realized all the places books could take you, and I thought, ‘Wow! This is great!’”

“The thing that is most rewarding is when a teacher will turn my books into creative projects with students. That is really heartwarming. I get big packages in the mail of kids’ drawings, and it is really neat that they do that. That is the best compliment I can receive.”

When it came time for Van Dusen to attend college, he had developed a love of reading; but it was his passion for art that determined his course of study. “I majored in painting and thought I would either graduate and become a famous painter, or I would be a college teacher. But neither of those ideas really worked out the way I thought they would.” Instead of pursuing the painting career, Van Dusen worked as a waiter for several years before being hired as an art director for a start-up magazine. “I began doing some cartoons, and then I illustrated some features in the magazine. Then, I got a job at a greeting card company when all the alternative greeting card companies were really hot. That company was sold to a larger company in New Jersey, and I was told I could either move to New Jersey or I could go out on my own.” It was 1988, and Van Dusen chose to stay in Maine and become a freelance illustrator. “And that is how I really started my career.” One day as he was working on an illustration, an image popped into his head. He saw a guy sitting in a boat that was stuck way up in the top of a tree. “I just sketched the image out and set it off to the side and went back to work. But I kept looking at it and wondered what I could do with it. Then I thought, ‘well, how would that guy even get up in the tree?’ And that little sketch was actually what started the whole book career because I built my first book, Down to the Sea with Mr. Magee (2000, Chronicle), loosely based on it.” Today, Van Dusen has written and illustrated eight of his own books. And in each, he includes an image of Mr. Magee. “In all the books I’ve written, somewhere there is a little Mr. Magee in one of the pictures. He is in all my books, even the ones he really shouldn’t be in like King Hugo’s Huge Ego (2011, Candlewick Press). Another thing I stick in my books is my sons’ initials. There are all kinds of little surprises in there! Kids just like finding stuff like that.”

Van Dusen not only writes and illustrates his own books, but he also illustrates the work of other authors such as Mac Barnett and Kate DiCamillo. “I want stories that really excite me. The stories I look for are stories that have a sense of adventure and sort of a silly aspect as well. My illustrations tend to be on the cartoony side, so I look for stories that have that kind of wacky, cartoony sense.” This year, Van Dusen serves as the illustrator for new books that fit his criteria precisely: President Taft is Stuck in the Bath (2014, Candlewick Press) and a series of books called Tales from Deckawoo Drive (2014, Candlewick Press).

“The President Taft book is just so funny. I think kids will like it because it has an authority figure who gets caught in a really embarrassing situation. I have also heard that teachers will like it because there is a historical aspect and it will be a fun classroom book.” Fans of Mercy Watson will recognize Deckawoo Drive as the place where the porcine wonder embarks on her rollicking adventures. “What Kate has done is taken favorite characters from the original Mercy Watson series and built new stories around each one. The minute I read the first book, I fell in love with them all over again. They are just sweet, really nice stories.” 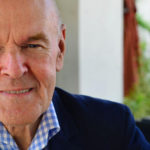 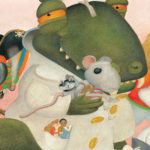