“I wasn’t much of a reader growing up,” says Katherine Applegate, the award-winning author of The One and Only Ivan (2012, Harper). “It is not that I didn’t read; I just wasn’t one of those voracious, flashlight-under-the-covers kind of reader.” A surprising admission from a prolific author boasting the John Newbery Medal for 2013. 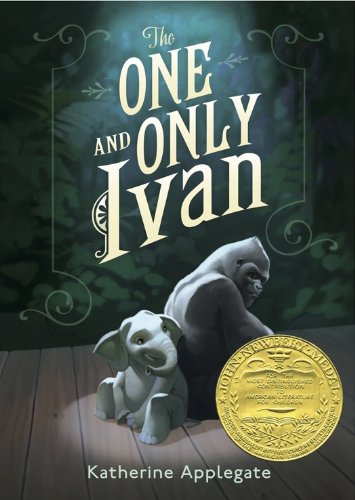 Known as “Kay” as a child, it took time for her to grow into her name as well as to grow into being an avid reader. “I think that sometimes it takes a long time to find the right book. It is like trying to find a best friend. I think that everybody has a book that will work for them; sometimes it just takes a while to find it.” For Katherine Applegate, the books that opened the world of reading to her were Charlotte’s Web and the Dr. Doolittle titles. “I wanted to be a veterinarian growing up because I was really an animal person. So for me, those were the right books.”

Applegate went on to graduate from college with a liberal arts degree that focused on English, and then promptly began her career waiting tables, cleaning toilets, and watering plants. “I went for a long fallow period. Even with my degree, I still was not devoutly in love with books. It took me a long time.” However, after her varied career of working “real” jobs, Applegate decided it was time to venture into the literary world. To learn the industry, she started by ghost writing Sweet Valley Twins books and Disney titles about Aladdin and Mickey Mouse.

Eventually, Applegate wrote two Harlequin romances with her author husband, Michael Grant, as her official entry into writing. That collaboration led to the Animorphs series (Scholastic) and eventually solo projects including The Buffalo Storm (2007, Clarion), the Roscoe Riley Rules series, and Home of the Brave (2007, Feiwel and Friends). “I started very slowly and only gradually worked up the nerve to take risks.”

Applegate took a big risk when she decided to move forward with The One and Only Ivan. Nearly 20 years prior, she had read a New York Times article about a gorilla named Ivan who had spent years in the B & I Shopping Mall in Tacoma, Washington. “It was a touching and bizarre story involving protests, litigation, and eventually a move to Zoo Atlanta. It really spoke to me and I wanted to tell it, but I wasn’t quite sure how.” Setting self-doubts aside, Applegate spent massive amounts of time researching Ivan and gorillas in general, and soon the story came together in beautiful fashion winning her the Newbery Medal and the admiration of young readers.

“I’m glad that kids have embraced it because that was my hope. It is the kind of book I would have read as a kid.” Not only have children embraced The One and Only Ivan on a personal level, but Applegate has received reports about classes taking action after reading it. For example, one classroom adopted a local gorilla and raised money to provide enrichment activities for it! “I love middle-grade readers—that age where they are still idealistic and want to change the world. I really love writing for that age.”

Even though Applegate is an award-winning author, she says “every book still starts as a blank page staring at you.” Lately, she’s been seeing lots of blank pages with the projects she is working on and has lined up. There is another middle-grade novel, a couple of picture books, and even a sequel to Eve & Adam (2012, Feiwel and Friends). “My hope is that my readers will just look at the world a little more compassionately with a little more empathy. That would be a wonderful thing.” 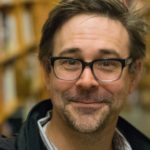 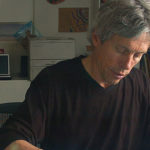