Creativity begins with wonder. For my first picture book, Leo + Lea, my wonder began upon meeting a boy who didn’t like stories; he just liked math. As a lover of stories, I was filled with questions: What would loving math feel like? Could I write a story that a math lover would like? How about a story based on a math pattern? And with that, I embarked on learning about a pattern I knew nothing about—the Fibonacci sequence—and discovered much more. 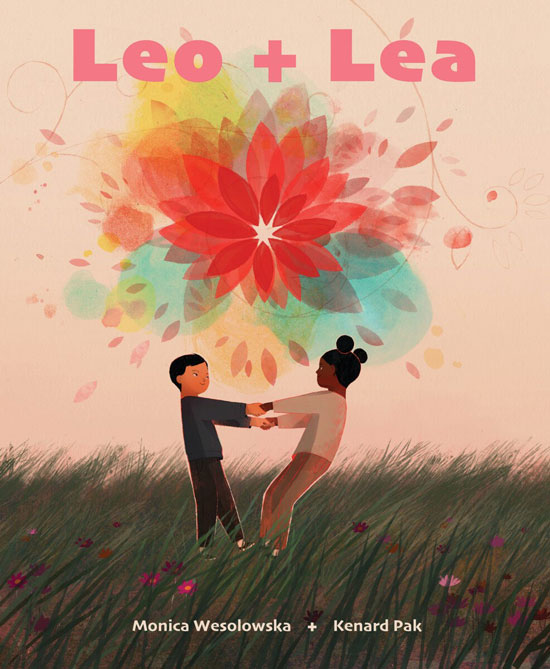 Let me back up to explain that I was once a little girl who sat in math class feeling frustrated by what it all meant and why it mattered. Along the way, I must have absorbed the myth that some people have “math brains” and some don’t because ultimately, I rejected math entirely and threw myself into stories. It wasn’t until I was an adult, visiting my own children’s math classrooms, that I encountered the work of math educator Jo Boaler and others who have studied the effect of emotions on math abilities. Math, it turns out, just like writing, should be approached from a place of wonder.

The Fibonacci sequence inspires plenty of wonder. Fortunately, on a basic level, the math in it is simple. Starting with zero and one, the subsequent numbers are always found by adding the previous two. Even young children can figure out how it starts: 1, 1, 2, 3, 5, 8. However, unlike many math-based picture books, Leo + Lea does not literally explain this math. I wanted to do something more subtle. In my book, the pattern is revealed through the words themselves. Starting with one word on the first page, the words follow the pattern up to 55 words in the middle, before reversing to a single word on the last page. At first, readers may not even be aware of the pattern. They’re busy paying attention to the back-to-school story of a solitary boy finding his first friend. Nonetheless, the pattern is there, asking readers to go back and explore.

Restriction can be a great stimulator for creativity. That is why teaching a poetic form like haiku is so popular in classrooms. In school visits, I’m able to introduce the idea of writing a Fibonacci-based poem or story. I can show students the many attempts I made to write this book. I also like teaching students about the history behind the pattern, going back thousands of years to the Indian mathematician Pingala who counted Fibonacci numbers of syllables in Sanskrit poetry. I introduce them to the medieval mathematician Leonardo of Pisa who further spread the pattern in his book about Hindu-Arabic numerals. Today, many people celebrate the Fibonacci sequence, especially for its appearance in nature. For example, many flowers have a Fibonacci number of petals. It seems nature uses this pattern to give things room to grow. This makes the pattern a lovely metaphor for two children finding room to grow themselves.

Leo + Lea offers plenty of teachable context, but for me, the best part of a school visit is reading the story. I love seeing all those eyes growing calm as the students follow the story, wondering where Leo’s counting will take them. When I reach the end, there is usually an audible gasp. The pattern is complete. We’ve returned to one word: skyward. Usually, a hand shoots up. Students want to ask about that final word. What does it mean? How is it connected to math? Why does it end the story? I love that my book leaves them with a sense of mystery. For me, that final word suggests that math is all around us. But a good book inspires many questions as well as many answers. So, I usually ask them what they think. I’m delighted by their answers, to see the wealth of their perceptions. “It ends that way,” one girl said, clearly impressed with herself and the world, “because numbers keep getting bigger forever!”

Readers bring themselves to every story they read. After writing the text of Leo + Lea, I was eager to see what the illustrator Kenard Pak would bring to the story. In his hands, I discovered a luminously diverse world. In their multicultural classroom, Leo presents as Asian American and Lea as African American. In addition, Pak has made room for neurodiversity. How? Knowing that Leo keeps himself calm by counting, Pak starts the book with a calm palette and quiet pages, slowly escalating to the chaos of the middle before resolving into a natural world that is alive with the colors that Lea uses in her drawings. Leo can be read in many ways. He could be on the autism spectrum. He could have obsessive compulsive tendencies. He could be anxious or introverted or totally focused on math. What’s moving to me is how many readers recognize Leo as a kindred spirit, for whatever differences they feel in themselves.

Leo is based on a real boy. Today, he’s studying math in college. Is this book for him? I certainly started the process hoping that a child like him might someday appreciate it. However, along the way I came to realize that rather than a book for children who already love math, this book may be even more important for those of us who don’t. Ultimately, I suppose I wrote Leo + Lea for my younger self. I wanted a place to wonder and grow. My hope is that a book like this, with its simple story of two children finding a connection to each other and the universe, offers both students and teachers plenty of room to wonder and grow as well.