One of the perils of visiting schools is that kids, teachers, librarians, and parents often ask which books you love and why. My favorites are always changing, and I have a difficult time picking one. I don’t mention Cixin Liu’s The Dark Forest—too grim. Ulysses or Sweet Valley High? Both too pretentious. So, typically, I’ll cite A Wrinkle in Time or A River Runs Through It. The first one I’m sure you know, and I think it holds up pretty well on re-reading, especially if you imagine that the evil IT at the center of the story is actually the leader of your Information Technology department. Wrinkle is a big, adventurous, and fairly weird novel, and I believe L’Engle knew exactly what she was doing with that first sentence.

But I’d like to focus here on River because of where it takes me. As a writer, I’m always thinking about why one book pulls me in and another does not, or why one story keeps calling me back. The writer’s voice, compelling characters, or an intricate story that demands second or third readings may do the trick. I read Dostoevsky for laughs, Virginia Woolf for plot, and Hemingway to help me understand my teenage daughters. But what often brings me back to a particular book over and over, year after year, is that the story takes me someplace I’d like to revisit. Like Disneyworld—actually, not really. Once was enough for me. Forget that.

These places don’t need to be idyllic. I re-read The Dark Forest each year even though it doesn’t depict a particularly pleasant future. But the world of A River Runs Through It, a book of stories by Norman Maclean, is a magical one. A young Brad Pitt starred in the movie version, and when I re-read the title story, I feel like I’m there in the beautiful clear rivers of Montana, surrounded by mountains, fishing with my handsome brother Brad. And I return, year after year, to be in and around that water.

As I was working through the early drafts of my latest novel, Atlantis: The Accidental Invasion, I kept thinking back to a story Maclean shares in the introduction to River. He’d been circulating versions of his stories among colleagues in the academic world when a professor made a powerful suggestion. She told him that he needed to inject his stories with his love for the lost, unspoiled world in which they were set. Maclean cites this advice as the best he received — and that love shines through in the final, published version.

I remembered this lesson when I was working on one Atlantis scene in particular. I’m slightly addicted to water myself; swimming and surfing in particular. When I was a kid, my dad, an ocean lifeguard, convinced my brother and sisters and me that saltwater could cure anything. These days I live on an island, and I was walking one of the beaches one day, picking up bits of trash, when I had the thought that if Atlanteans really existed, they’d be furious with us for polluting the sea and changing the climate. That was the initial spark behind Atlantis: The Accidental Invasion, a story that follows a girl from the undersea world and an exploratory crew from the surface as they’re chased by nefarious government agents. 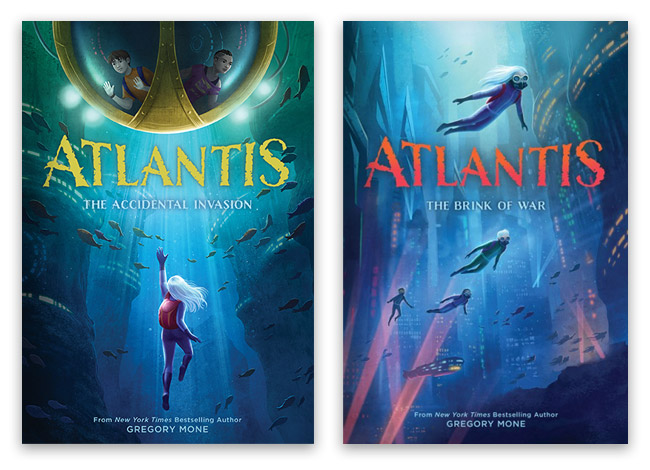 After reading and re-reading my first few drafts, though, I felt like something was missing, and recalled the advice Maclean received. My early drafts were missing that love. I don’t mean love for the world I created, exactly. That would be a little too self-centered. Instead, I needed to inject the story with my love for the water, the feeling I get when I’m immersed in or swimming through a clear sea or pool. So, I revised again, and wrote the sequel, Atlantis: The Brink of War (Spring 2022), with that in mind from the start.

At one point in the first book, Kaya, the girl from Atlantis, dives into a massive underground pool and briefly loses herself in the water, enjoying the swim so completely that she forgets she’s in the midst of an emergency. Something similar happened to me an hour ago—I was a half mile offshore, swimming with my friend Josh, when I remembered I had to finish this essay.

There are so many reasons we read and re-read—beautiful prose, powerful characters, a moving story. But feeling the author’s love for the world, whether it’s imagined or real, is often what I find most compelling. L’Engle adored her strange universe. The planet N.K. Jemisin built in her Broken Earth trilogy comes to life in part because of her obvious passion for its inner workings. You can feel this through the writing. This love, in turn, powers one of the great strengths of books, that unique ability to lift you up and out of your surroundings and situate you someplace wholly different and unfamiliar. In fact, I think I’ll return to Montana now—Brad’s waiting for me.