We are excited to welcome Sy Montgomery as our guest author today. For her most recent book, The Magnificent Migration : On Safari with Africa’s Last Great Herds, she actually traveled to Africa and followed the wildebeest migration.

Sy is well known for, among others, her books in the Scientists in the Field series. Written especially for upper elementary and middle school students (though fascinating for adults as well!), the series shows that the job of scientist does not always involve wearing a white coat or working in a climate-controlled laboratory with glass vials and Bunsen burners. (Do labs use Bunsen burners any longer?) Many scientists are out in the field, getting wet and dirty, sweating and shivering. Much of their time is spent on activities that are either boring and repetitive, or urgent and frantic. These adventurers wouldn’t be anywhere else. And neither would Sy. In fact, The Boston Globe describes her as “part Indiana Jones and part Emily Dickinson.”

The Magnificent Migration is recommended for middle and high school students as well as adults. Though not part of the Scientists in the Field series, it is written with the same awe and excitement and insight that Sy weaves into all her books. In her guest post, she talks about how she came to join scientists following the migration.

The Magnificent Migration is a book I had waited more than thirty years to write.

One of my best friends ever since my husband and I moved to our home in New Hampshire happens to be the world’s top expert on wildebeest, Dr. Richard Despard Estes.  We met at a dinner at the home of a mutual friend, who, not realizing that I am a vegetarian and my husband is Jewish, served a pork roast. While Dick was enjoying the roast (and I was feeding my serving surreptitiously to my hostess’ dog under the table), we struck up a fascinating conversation about the porcine vomeronasal organ—an organ that yields chemical information that even a pig’s delicate nose cannot detect—which Dick first discovered by dissecting the head of a pig he procured at a slaughter house. Now that’s dinner conversation!

I loved Dick immediately for his encyclopedic knowledge of animals. He literally wrote the book on African mammals.  In fact, he wrote two: His field guides, The Behavior Guide to African Mammals and The Safari Companion are considered so essential that it’s almost impossible to find an English-speaking tourist group without one of them. 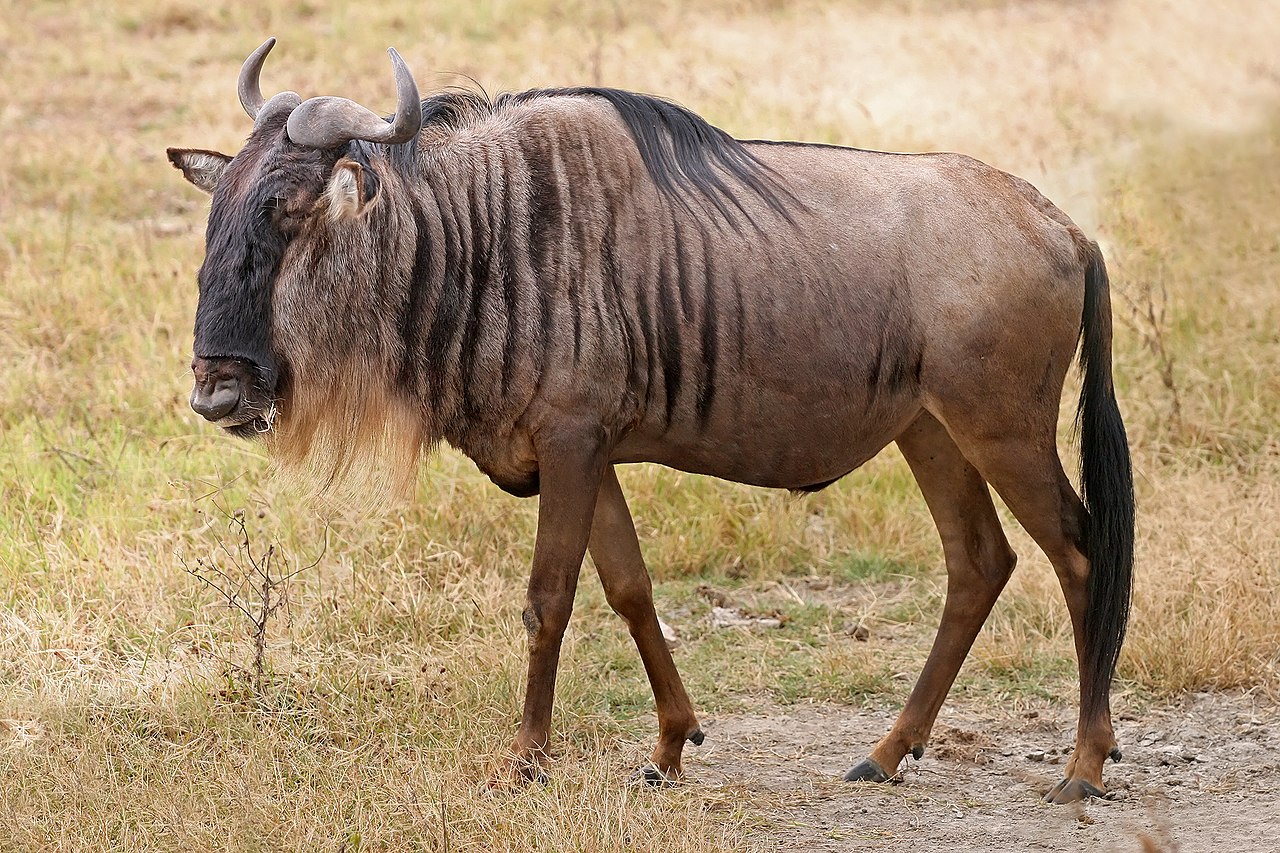 But his favorite animal—the object of his most devoted fascination, and the source of his scientific Muse—has always been a creature far too many people overlook: the wildebeest, or gnu.

This long-bearded, high-shouldered antelope looks like no other creature: people joke it must have been designed by committee. But Dick points out it must have been one smart committee, for these animals are enormously successful. While tourists may be more interested in getting photos of one of Serengeti’s lions, or leopards, or giraffes, it’s really wildebeests who are running the place, Dick points out.

Their numbers stupefy. Their movements are described in terms normally reserved for oceans or weather. They storm across rivers and lakes; they tumble down cliffs; they pour across the tallgrass savannah; they stream over the shortgrass plain. Following the greening grass in a roughly clockwise route of 1,500 kilometers, 1.5 million  wildebeests collect an unrivalled entourage of 200,000 zebras, 500,000 Thompson’s gazelles, 18,000 elands, 97,000 topi—and lions, jackals and hyenas follow.

Wildebeests drive the ecology and evolution of the largest savannah ecosystem in the world, and their year-round migration defines wild Africa like no other event in nature.

Almost every year since Dick began his pioneering studies of the area’s most numerous mammal in 1962, he has returned to Africa to re-join them on their year-long, unending journey. “This is the greatest of all mammalian migrations,” Dick had always told me. “To be part of something as huge as this,” he assured me, “is an amazing feeling.” 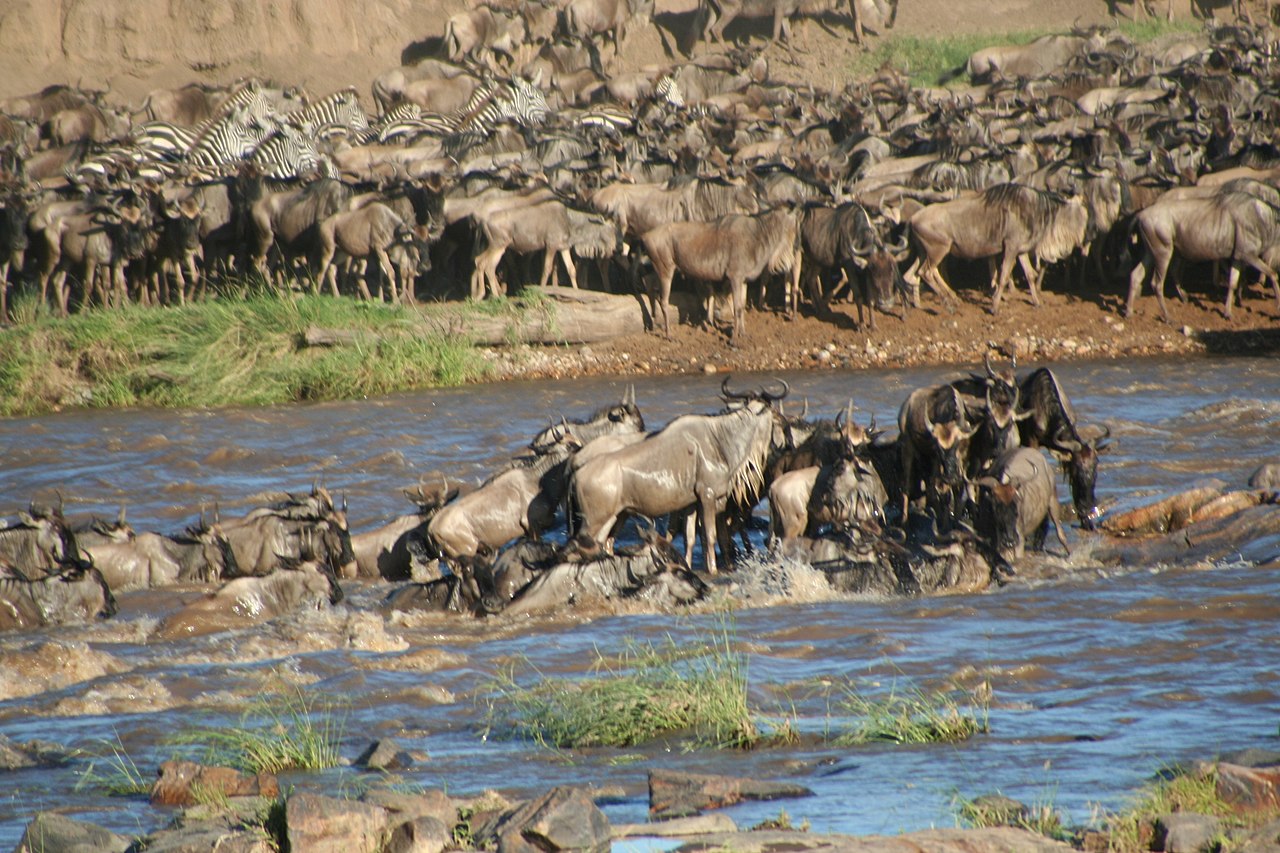 Wildebeest crossing the river during the Serengeti migration

I had always wanted to join him. Finally, two years ago, when Dick was 88, I got my chance.

With my dream team of five fellow safariists—ranging in age from 18 on up—Dick and I decided to observe the wildebeests during their chaotic and dramatic rut, or mating season. At last, I was to fulfill a dream: in the company of my dear friend on what might well be his last safari, I would join the wildebeests in taking part in the world’s most magnificent mammalian migration.

This proved easier said than done. Despite Dick’s more than five decades of experience, the wildebeest migration does not always take the same exact route. And given the vagaries of weather, El Nino, human interference, and climate change, trying to catch up with the massive, moving herds was far from assured. On the way, we would encounter the casualties of poachers’ snares; see newborn animals only hours old; and face a car breakdown that left us stranded without cell service in the midst of lions, leopards and hyenas—as a wall of fire approached our disabled vehicle.  We would witness animal wonders and sorrows I never expected to see.  The adventure that resulted was even more surprising, revelatory, and ultimately satisfying than I’d ever hoped—one of the most exciting safaris of Dick’s long and eventful career. 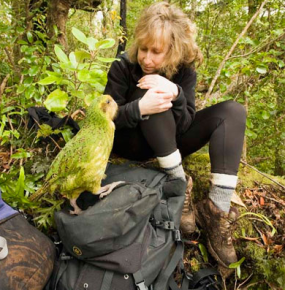 Researching films, articles, and over 20 books, Sy Montgomery has hiked the Altai Mountains of Mongolia looking for snow leopards, tracked tree kangaroos in Papua New Guinea, and more. A National Book Award finalist, she has also been honored with a Sibert Medal, two Science Book and Film prizes from the National Association for the Advancement of Science, three honorary degrees, and many other awards. She lives in Hancock, New Hampshire. Visit her online at symontgomery.com and on Twitter @SyTheAuthor. 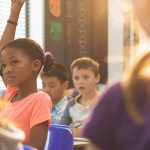 Great Easy/Fiction Titles for May 2019Experts