Book Review: The Bad Seed and The Good Egg 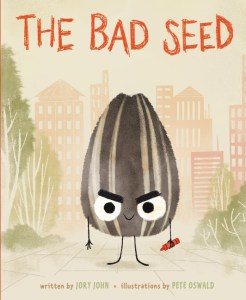 The Bad Seed is a story of a seed who does some pretty awful things.  His manners (and hygiene) leave a lot to be desired.  In one of my favorite pictures, he makes babies cry by making faces at them.  He happily disturbs the peace.

But the seed has been through some rough patches.  He had a happy family life but they lost their home and were separated.  He felt that the things that he had gone through had caused him to turn into a bad seed.  But one day, he decides to be better.  He’s not perfect at it, of course, and some continue to think of him as a bad seed, but others see him trying.

This story is great for showing kids that your reputation and past actions don’t make you who you are.  It is possible to change but you’re not going to be good all the time.  The book also shows that your behavior is a decision that you make.  It’s also refreshingly honest in showing that some people will hold your past actions against you and that the rest might not think you’re immediately good, but maybe not all bad. 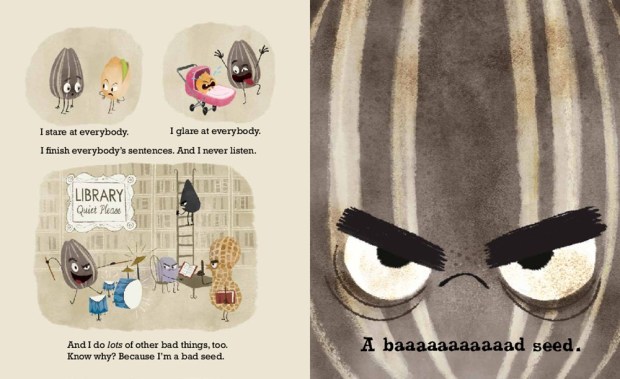 The Bad Seed can serve as an important reminder for adults as well.  Some kids go through pretty awful things, many of which we know nothing about.  It’s vital that we give them new chances every day and celebrate minor victories. 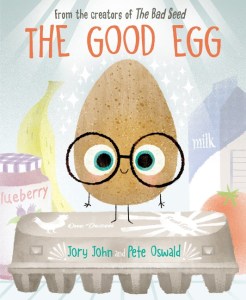 A companion book to The Bad Seed, The Good Egg is the self help book I’ve been looking for my whole life (and I’ve read quite a few).  The good egg is as helpful as possible (sometimes in a way that makes things worse, as the very funny illustrations show).  He has put himself in charge of everyone.  The other eggs in his carton wantonly misbehave and he spends all his time trying to fix their messes until finally he cracks.

He decides he needs to leave.  He goes on a long journey of self discovery.  Along the way, he learns to take care of himself.  The egg finds hobbies and ways to relax.  Taking time for himself helps him heal.  He realizes that he misses his carton of friends and returns home.  While he was gone, they’ve learned to appreciate him a bit, too.  Most importantly, he’s learned that they can be a bit bad and it doesn’t really affect him.  Sometimes, he even joins in.

What a relief!  It’s amazing when you realize that you don’t have to take care of the world or be perfect all the time.  It’s also nice to see mental and physical health tied together, and seeking medical help when things get difficult.  The mindfulness and coping tools used are ones that kids can easily use themselves when alone, at home, or in a classroom. 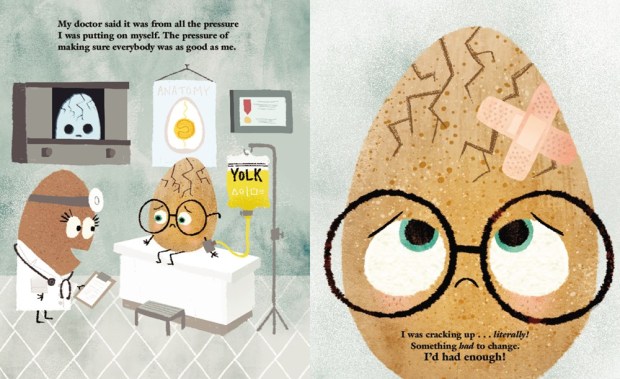 According to the American Psychological Association, “Anxiety disorders are the most common mental health disorders among children and adolescents. Nearly 32 percent of adolescents in the United States have an anxiety disorder…[y]et anxiety is woefully underdiagnosed, say multiple experts who treat children with the disorders. ‘The majority of children with anxiety never receive treatment.’”  It’s important that we acknowledge anxiety and teach kids healthy ways of dealing with their anxiety and emotions.  I can’t imagine a more enjoyable way to do it than with this book.  It’s the best book I’ve read in a long time, for any age range.

Harpercollins Jory John Pete Oswald
Book Review: The Bad Seed and The Good Egg2019-03-182019-08-19https://www.mackincommunity.com/wp-content/uploads/2018/06/mackin-community-header-logo.pngMackin Communityhttps://www.mackincommunity.com/wp-content/uploads/2019/03/br-goodegg-badseed.jpg200px200px
About
Ardith Ohka
Before becoming a Collection Management Specialist at Mackin, Ardith worked in Public Libraries for 8 years, most recently as a Teen Services Supervisor. She has her MLIS from Wayne State University and her B.A. in English with a minor in Secondary Education from Hamline University. Her main focuses are Manga, picture books, and Makerspace titles and products, but she enjoys reading titles in all genres for all ages. One of the best perks of her job is getting to see new books before they’re published. 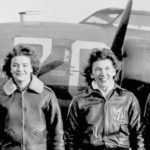 Yes, She Can! : Women’s BiographiesExperts 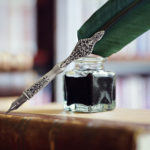