Take a look at these exciting nonfiction titles published in November. Enjoy and learn!

Once Upon a Star : A Poetic Journey through Space by James Carter & Mar Hernandez. 9780525579335. Random House. 2018. Gr PK-2.
Readers will learn about the Big Bang and astronomy in this engaging blend of poetry and science.

P Is for Pterodactyl : The Worst Alphabet Book Ever by Raj Haldar & Chris Carpenter (ill. by Maria Tina Beddia). 9781492674313. Sourcebooks. 2018. Gr K-3.
For kids a bit older than the typical abecedarian, this delightful alphabet books traces the alphabet through the silent letters of words.

Tiger vs. Nightmare by Emily Tetri. 9781626725355. Macmillan. 2018. Gr K-2.
Tiger has a monster under her bed, and they play together every night before going to sleep. Monster scares away all Tiger’s nightmares so all she has are good dreams. But then, a huge nightmare appears that Monster cannot fight alone.

Bold & Brave : Ten Heroes Who Won Women the Right to Vote by Kirsten Gillibrand (ill. by Maira Kalman). 9780525579014. Random House. 2018. Gr PK-3.
One hundred years ago the Nineteenth Amendment gave women the right to vote. Here are ten women who were instrumental in their fight for justice.

The Eye That Never Sleeps : How Detective Pinkerton Saved President Lincoln by Marissa Moss (ill. by Jeremy Holmes). 9781419730641. Abrams. 2018. Gr 2-4.
In the 1850s, Allan Pinkerton and the Pinkerton National Detective Agency reportedly thwarted a secessionist assassination plot against Abraham Lincoln on the train ride to his inauguration.

Pies from Nowhere : How Georgia Gilmore Sustained the Montgomery Bus Boycott by Dee Romito (ill. by Laura Freeman). 9781499807202. Simon & Schuster. 2018. Gr PK-3.
After Rosa Parks was arrested, bus boycotts broke out in Montgomery, Alabama. Georgia Gilmore, cook at the National Lunch Company, organized a group of women to cook, bake, and fund-raise for gas to help the protest. Though she faced retaliation, Gilmore used her own talents to sustain the struggle to end segregation. This picture book biography includes one of her recipes.

The Vast Wonder of the World : Biologist Ernest Everett Just by Melina Mangal (ill. by Luisa Uribe). 9781512483758. Lerner. 2018. Gr 1-4.
Born in 1883, poet and scientist Ernest Everett Just struggled against racism and discrimination to achieve his dream of becoming a scientist despite the limitations placed on him as an African American. After making great strides in the field of cell biology, Just, who began teaching in the English department at Howard University, eventually became head of the biology department.

The Capture of Black Bart : Gentleman Bandit of the Old West by Norman Finkelstein. 9781613739952. IPG. 2018. Gr 4-6.
Black Bart wasn’t famous merely for being an Old West stagecoach robber; he was famous for being such a gentleman about it. During his 38 robberies, he never injured anyone or even fired his gun. In fact, his guns were never loaded! Readers will enjoy this well-researched biography of a polite, humorous bandit who wrote poetry and of the detective who was determined to catch hum.

Life at the Zoo : The Secret World of Your Favorite Animals by Michael George. 9781454930891. Sterling. 2018. Gr 3-6.
Amazing close-up pictures and interesting text shows young readers what life at the zoo is really like for its residents.

Pick, Spit & Scratch : The Science of Disgusting Habits by Julia Garstecki (ill. by Chris Monroe). 9780760361788. Hachette. 2018. Gr 4-6. (See also Sniff, Lick & Scratch : The Science of Disgusting Animal Habits. 9780760363454.)
Learn about the science concerning the disgusting bad habits that people (and animals) have. Each double-page spread covers one specific habit and the facts and myths surrounding it. From nose-picking to peeing in pools (or sniffing butts and puking on food), this book will keep readers grossed out and laughing

Welcome, Wombat (True Tales of Rescue) by Kama Einhorn. 9781328767028. HMH. 2018. Gr 2-5.
A young female wombat tells what life is like at a wombat sanctuary in Australia. She tells about being rescued, healed, and rehabilitated—and maybe even released. This book contains short chapters and is packed with photos.

I Wondered about That Too : 111 Questions and Answers about Science & Other Stuff by Larry Scheckel. 9781943431380. IPG. 2018. Gr 6-8.
This sequel to the popular I Always Wondered About That asks and answers 111 questions about science and science history, including what color our brains are and whether it is possible to create a real lightsaber.

Marshfield Memories : More Stories about Growing Up by Ralph Fletcher. 9781627795241. Macmillan. 2018. Gr 5-8.
Taking up where Marshfield Dreams ended, this biography covers the upcoming adolescence of the author.

She Did It! : 21 Women Who Changed the Way We Think by Emily Arnold McCully. 9781368019910. Hachette. 2018. Gr 4-7.
Whether famous or little-known, these 21 women thought beyond the status quo and challenged people to think in new ways about science, business, art, and society

Zenobia by Morten Durr (ill. by Lars Horneman). 9781609808730. Triangle Square. 2018. Gr 5-8.
A young Syrian girl, Amina, escapes the civil war on an over-crowded boat of refugees. The boat capsizes and Amina is thrown overboard. As she drifts, she reflects on the journey she took to escape, the moments of peace as she made dolmas with her mother, and the brave, ancient warrior Zenobia, a great Syrian queen, the stories of whom gives Amina strength.

The American Revolution : A World War by David Allison & Larrie D. Ferreiro. 9781588346339. Smithsonian. 2018. Gr 9-Adult.
This illustrated collection of essays explores the legacy of the American Revolution domestically and abroad. The essays look at the effects the war had on international relationships and global superpowers and how Britain was often pulled away from the revolution to fight colonial interests in the Caribbean and India.

The Computer Book : From the Abacus to Artificial Intelligence by Simson L. Garfinkel & Rachel H. Grunspan. 9781454926214. Sterling. 2018. Gr 9-12.
This recent addition to the Sterling Milestones series presents 250 inventions, publications, and events that changed the future of computer science in their time.

Mural Masters : A New Generation by Kiriakos Iosifides. 9781584237297. Ingram. 2018. Gr 9-Adult.
No longer hidden or created in secret, public art has become open and celebrated. This book showcases work by more than 90 street artists and includes collaborative as well as individual efforts around the world.

The Science Book : From Darwin to Dark Energy by Clifford A. Pickover. 9781454930068. Sterling. 2018. Gr 9-12.
Another new addition to the Sterling Milestones series, The Science Book presents 250 of the most ground-breaking milestones gathered from the other science titles in the series, including math, physics, medicine, biology, chemistry, engineering, psychology, and space. 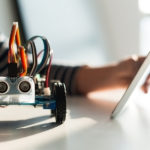 5 Factors to Keep in Mind When Offering Makerspace Experiences in the LibraryLibrary, Makerspace