“I didn’t want to be an author when I grew up,” admits award-winning author Catherine Thimmesh, “I never even knew it was an option.” 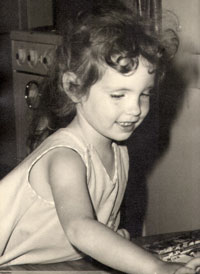 As a child, Thimmesh loved to write. There were no daily journal entries and volumes of completed diaries; rather, she wrote stories and plays and song lyrics. Though she received feedback like “you’re so creative!”, she doesn’t recall receiving encouragement to keep writing. “No one was really interested in hearing me read my work. This was OK because we had a very large slate of chalkboard at home, and I was the permanent teacher. I regularly subjected my imaginary students to my stories and plays and had all sorts of fun.”

In addition to writing, Thimmesh read a lot and had her favorites, of course. There were the Judy Blume books, the Bobbsey Twins books, the Great Brain books, and Where the Red Fern Grows (Doubleday, 1961). And one must not forget Dear Lovey Heart (Vagabond Books, 1975)—the book she ordered from the Scholastic Book Club handout with her own money. Interestingly enough, it is not her own books or favorites that spark detailed memories, but her younger brother’s favorite book. 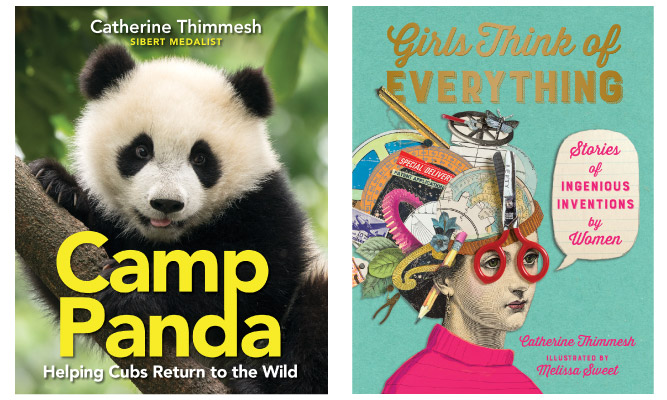 “He had a MOST favorite book, Emmett’s Pig (HarperCollins, 1959), and checked it out from the library at least 100 times. When he and his wife had their first baby, I thought it would be a wonderful surprise to give them Emmett’s Pig. But my brother barely remembered it and did not remember his attachment to it as a kid. I’m not sure why I remember that so vividly. It might be that this was one of the first books I could read by myself out loud. I don’t know for certain if this was the case or not, but there must be some reason why I have such vivid memories of a book I liked well enough but didn’t particularly love.”

As Thimmesh was unknowingly preparing to be an author, she had several miscellaneous jobs, like waitressing, and dabbled in various interests. Finally, she settled into a career as a contemporary arts gallery owner in Minneapolis for about three years, but she wasn’t truly at ease. Writing was calling to her.

“One thing I guess I’d like to be remembered for is being an author who respects the intelligence of my young readers. It’s something that’s important to me as a writer—and as a reader—and I hope that is evident in my work.”

“While I had the gallery (and it was becoming obvious that I could not sustain the business), I decided to take a creative writing class at The Loft Literary Center. There was one offered in writing for children that fit my schedule, and I thought ‘hmmm I love writing, I love kids. I’ve never thought to combine the two. I should check it out.’”

Thimmesh found she thoroughly enjoyed storytelling for children and thought she was at least fairly decent at it. So she researched the field, read an astronomical amount of children’s books, joined the Society of Children’s Book Writers and Illustrators (SCBWI), attended a few conferences, and joined a small writers’ group. She even spent a year working in children’s marketing at a Minneapolis publishing house to get a feel for how the business worked. Finally, she felt ready to make the leap; she submitted a magazine article entitled “What’s So Neat About a Lopsided Lady?” about making the museum experience fun for kids.

“I lucked out when the first thing I submitted for publication was accepted and published. That gave me an initial boost of confidence, and I started thinking more seriously about trying to become a children’s book author. I met my Houghton Mifflin Harcourt (HMH) editor, Ann Rider, at an SCBWI conference that I had helped organize. I had submitted Girls Think of Everything (Houghton Mifflin, 2000)  to her as a piece of fiction with these nonfiction bits on inventions by women woven within. Her primary piece of feedback was that the fiction story felt contrived. (She was right.) But she loved the nonfiction bits and wondered if I might like to try turning it into a nonfiction book. My initial response was ‘But I don’t think kids really read nonfiction.’ And she replied, ‘I think they do if it’s good.’ (She was right.)”

“My ﬁrst real attempt at writing a book for children was what I’ve called a bad picture book cliche. After discovering my interest in children’s books, taking a class, and reading and studying the picture book form at the library, what I came up with fell into the camp of: anthropomorphized animal not liking something about themselves, or doing something physically or behaviorally opposite to that we know to be true. A giraffe who doesn’t want to be tall, or a nocturnal animal who’s afraid of the dark for example. Not sure why I chose the word cliche because I can’t think of tons of examples … but the idea at least felt ‘obvious.’

“My attempt was a baby duck who was afraid to get her feet wet and avoided puddles at all costs. Lo and behold, several years later, the extraordinarily talented Amy Hest and Jill Barton gave us In The Rain with Baby Duck (Candlewick, 1999)—a picture book masterpiece in my opinion. I don’t recall sending my own story out on submission, but it’s possible that I did.

“And what did I learn? What every person in a creative ﬁeld learns at some point: ideas are just the tip of the iceberg—essentially a dime a dozen—it’s the execution of the idea that counts. Every time.”

Where Do Those Ideas Come From?

“Like many others, I have an idea ﬁle for stashing tidbits and notes that I ﬁnd interesting and that might inspire future projects. Truthfully, it’s more of an ‘idea ﬁle’ (quote-unquote). Because alas, my idea ﬁle is a disorganized mess, and not a ﬁle at all. I have various folders on my computer—all labeled slightly differently—and many I can’t ﬁnd or I forget about until I happen to stumble upon them. I have ideas on Post-It notes—some compiled into one place—others randomly strewn about: by my bed, in the kitchen, stuck to the current manuscript that I’m working on, etc.

“I probably shouldn’t announce how scattered I can be, but sometimes the truth is the truth—embarrassing or not. I have learned too often that trying to recall ideas from my ‘brain ﬁle’ often fails—so I scribble stuff down in the moment—on whatever is handy—or bookmark a link in passing. The upside to this haphazardness is the often random rediscovering of interesting tidbits and experiencing the thrill of an ‘aha’ moment when something clicks. 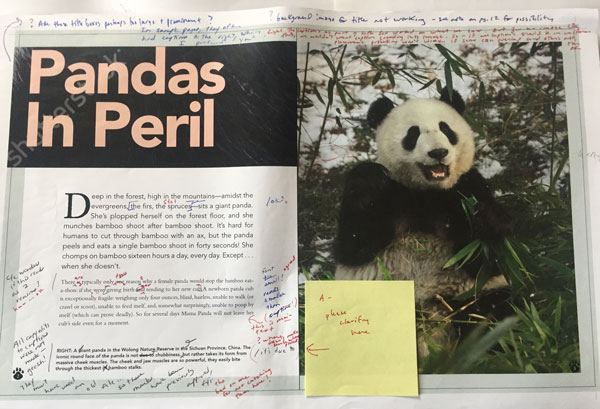 “In fact, Camp Panda (HMH Books for Young Readers, 2018) arose from such a method. I had bookmarked several photos and news stories about these caregivers dressed in panda suits, holding cuddly panda cubs. There were no notes accompanying the articles, mainly just intriguing and awfully cute photos. I stumbled upon the links a year or two after I had saved them and had the same reaction: I love these photos! But what is going on? Serendipitously, I opened a notebook a few days later to ﬁnd a note to myself in the margin, starred and boxed off, with the page earmarked. Note: ‘What is the story behind those guys in panda suits? Why are there just a few lines of information? Look into it.’”

It is difficult to believe Girls Think of Everything was first published 18 years ago, especially since each year a new audience discovers it. With its longevity and popularity, Thimmesh’s publishing team at HMH asked her to update the book as it approaches its 20th year anniversary. Was she excited to jump in? Not really.

“At first I wasn’t really inspired to do so. It was a little bit along the lines of: I’ve already done that and would rather find new projects/subjects to work on. But my editor brought it up a few times, so I decided to revisit the book and think more in depth about revising and updating. I’m so glad I did! I’m very excited about the revision coming out in October. There are seven brand new stories, and Melissa Sweet’s art is phenomenal.”

So what made the cut for this revised version? “Deciding who to include is a lengthy and fairly subjective process. First, one of the things that was so appealing about a revision was being better able to represent diversity among women, which, unfortunately, was quite limited in the initial book. Researching the original text in 1998 was an enormous challenge: it was pre-Internet and pre-Google searching, and women simply didn’t have much written about them in general—and women of color even less so. It was extraordinarily difficult to find inventions by women of color that were also kid friendly and would be of interest to a young reader. So one of the joys in doing the revision was having a better research tool to find some amazing inventions by women of color and also by women outside of the U.S. At the end of the day, I tried to include inventions and women who I think will inspire young readers in some way—hopefully to come up with their own creative solutions to problems, whether through invention or some other means.”

“When my kids were young, I discovered a circus arts summer camp in St. Paul and signed them up immediately. It sounded so fun! And unique. Turned out, there were classes offered year round and circus became our second home for the next 13 years. One day I commented to another circus parent about these amazing opportunities our kids got that we never had, and they told me that there was an adult ﬂying trapeze class offered. So I signed up. These days, I still do trapeze with a small club—mostly just in the summer, outdoors—and I haven’t improved much over the years. In fact, I’m pretty bad at it—but I don’t care because it’s really fun and great exercise too. 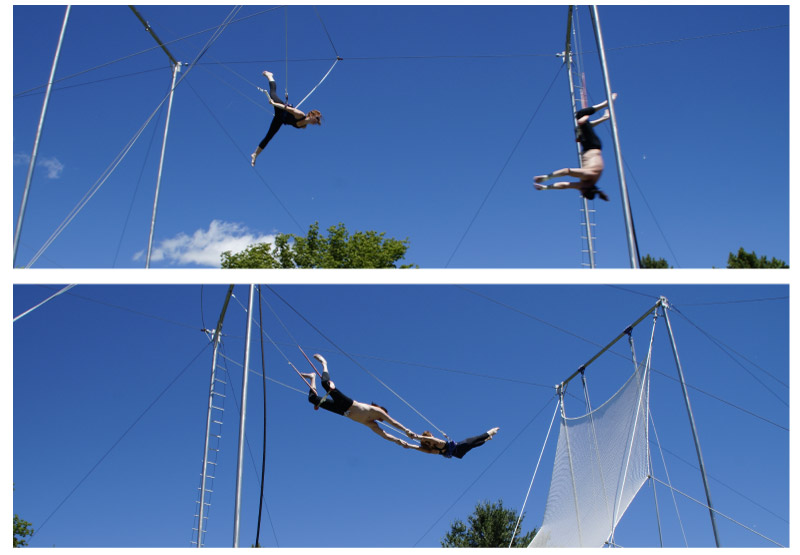 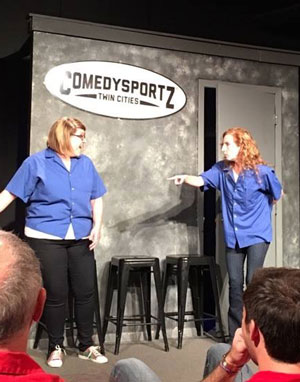 I took a class because I wanted to try something new and challenging and outside of my comfort zone—and boy, was it! But still, I enjoyed it, so I kept going. I improve little by little and have fun—so that’s good enough for me.

In addition to working on the updated inventions book, Thimmesh is also busy with other projects and responding to fan mail. “I’m currently working on a couple of exciting new nonfiction books for middle-grade readers as well as a nonfiction-based picture book for babies and toddlers. Readers can reach me by email at cthimmesh@comcast.net. If they want to send an actual letter and then receive an actual letter in response, they can write me at:

With a thick folder of new ideas, a variety of interests, and a deep curiosity, Thimmesh is sure to be writing for years to come. “I hope readers will be inspired to explore and nurture their curiosity and inquisitiveness about the world around them. I hope they’ll realize they are the leaders and innovators of tomorrow—actually, in many ways, of today as well—and that each person can contribute to the greater good regardless of how small or large the contribution. I hope young readers will be sparked by something in one of my books—a person, an action, an idea—and then go out into the world and act on that spark…build the ﬁre within.” 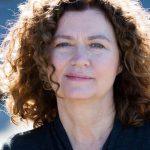 The Lost Art of the Letter: Guest Post by Sheila O’ConnorBooks in Bloom