Check out these exciting easy and fiction titles published in December. Happy reading!

Groundhug Day by Anne Marie Pace (ill. by Christopher Denise). 9781484753569. 2017. Gr PK-2.
Moose is organizing a Valentine’s Day party and wants to invite everyone. But a friend informs him that if Groundhog sees his shadow, he will stay in bed another six weeks—and miss the party. The friends come up with a plan to stop Groundhog from seeing his shadow.

Hu Wan and the Sleeping Dragon by Judy Young (ill. by Jordi Solano). 9781585369775. 2017. Gr 1-4.
In 16th-century Beijing, Hu Wan and his grandfather grow gourds and carve them into bowls and ladles to sell. One special gourd each year is made into a cricket cage. This year is Hu Wan’s first time to make the cage, which he carves into the shape of a dragon. When the Emperor dies, he decides to give the cage to the new nine-year-old Emperor.

Mouseling’s Words by Shutta Crum (ill. by Ryan O’Rourke). 9780544302167. 2017. Gr K-2.
A young mouse takes on the job of word collector, despite the dangers job searching for and scavenging words. Until one day he comes face to face with the library cat, in this version of Aesop’s The Lion and the Mouse.

No Hugs for Porcupine by Zoe Waring. 9780762462254. 2017. Gr PK-1.
Porcupine lives in a forest where all the animals like to hug. But no one wants to hug Porcupine and risk getting stuck by his quills. Lonely, he goes off to sulk—and finds someone who has the perfect solution.

Rot, the Cutest in the World! by Ben Clanton. 9781481467629. 2017. Gr PK-2.
Rot is a mutant potato and definitely not cute. Despite that, he joins the Cutest in the World Contest. When his competition—a baby bunny, kitten, and little jellyfish—pick on him, he decides to be himself, and a surprising panel of judges (a trio of mutant fruit) awards him the prize!

This Is Not a Valentine by Carter Higgins. 9781452153742. 2017. Gr K-3.
A boy offers non-traditional gifts to his crush, but her reaction to the dandelions, moon-blaster, and other girls shows that he knows just what she really likes.

Valensteins by Ethan Long. 9781619634336. 2017. Gr PK-2.
When Fran K. Stein’s monster friends come across him making a valentine, they are appalled when they finally realize what a valentine represents. What can be more scary—and gross—than falling in love? This humorous tale is a great read-aloud for both Valentine’s Day and Halloween.

The Crims by Kate Davies. 9780062494092. 2017. Gr 4-6.
The Crims are a family of small-time crooks, and Imogen Crim is glad to have a different future, starting with her acceptance at Lilyworth Ladies College. But she is expelled when her family admits to a really major crime. However, Imogen knows there is no way her bumbling relatives could have pulled off something so complicated—but how can she prove it?

The Haunted House Next Door (Desmond Cole Ghost Patrol, Book 1) by Andres Miedoso (ill. by Victor Rivas). 9781534410398. 2017. Gr 1-3.
When Andres moves to a new time, he becomes friends with his neighbor Desmond, who runs a ghost-hunting business. Thanks goodness—because Andres’s house is haunted! There goes his wished-for normal life!  The first title in this funny supernatural series will be a hit with new chapter readers.

Sink or Swim (Magic School Bus Rides Again) by Judy Katschke. 9781338232141. 2017. Gr 2-4.
This new early chapter book series brings Ms./Professor Frizzle’s younger sister in as a new teacher at Walkerville Elementary. She may be new, but she has the same motto as her older sister: take chances, make mistakes, and get messy!

The Wishing Wings (Butterfly Wishes, Book 1) by Jennifer Castle. 9781681194912. 2017. Gr 2-5.
Magical butterflies talk and grant wishes in this early chapter book series. Human sisters Addie and Clara discover that the butterflies are trapped by an enchantment, and they must figure out how to break it.

Before Now by Norah Olson. 9780062347077. 2017. Gr 9-12.
Atty and Cole have run away from their hard lives in the city. As their old lives threaten to catch up with them, they promise they will stay together forever…no matter what.

Here, There, Everywhere by Julia Durango. 9780062314031. 2017. Gr 9-12.
Moving from Chicago to Buffalo Falls is hard, and Zeus is sure this summer will be the worst—until he meets Rose. He wants a future with her, but her desire is to leave Buffalo Falls to go to a music conservatory, and his mom is talking about moving back to Chicago. Give this book to readers who like a sweet, light romance.

The Love Letters of Abelard and Lily by Laura Creedle. 9780544932050. 2017. Gr 7-12.
Lily, who has attention-deficit hyperactivity disorder, and Abelard, who has Asperger’s, meet in detention and discover a mutual affinity for love letters—and, despite their differences, each other.

Love, Life, and the List by Kasie West. 9780062675774. 2017. Gr 8-12.
When Abby is told that her painting has “no heart,” she makes a list of things she’s never done before. She’s also hoping that her best friend Cooper will realize that he feels the same way about her as she does about him. Fans of YA rom-com will be delighted with West’s newest.

The Truth Beneath the Lies by Amanda Searcy. 9781524700898. 2017. Gr 9-12.
Kayla just wants to run away from the government housing she calls home, her unstable mother, and her job at a food store. Betsy just wants to survive her new rules, a new school, being watched, and the threat of the burner phone under her bed. When Kayla’s and Betsy’s lives collide, it will change both of them. 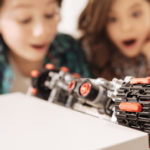