Learners as Leaders: Are We Modeling Curiosity?

“Leadership and learning are indispensable to each other.” —John F. Kennedy

In his engaging 2013 Ted Talk, Ramsay Musallam shares how a life-threatening situation, a conversation with his surgeon, and the questions of his four-year-old daughter caused him to create the following rules for his classroom:

I recently left a role in a large Minnesota district where I was facilitating an English/Language Arts team of teacher leaders as the district was in its fifth year of implementing the MN Academic Standards for English/Language Arts. I spent four of those five years leading the grade 6-12 work. Beginning that work was hard. I started the year as a Teacher on Special Assignment with dread. I was reluctant. I wasn’t excited. In fact, I truly believed that year would likely be my only in a district role. I’d be returning to the classroom as soon as I could. Fortunately, my perspective changed…for the better. Largely due to Musallam’s advice and my colleagues’ willingness to be vulnerable and open to trying on new thinking.

Once the team of ELA Lead Teachers were named (we hired eleven educators at stipend positions), we gathered to build our team and began to tackle what we knew would be a bumpy road ahead. Like many school districts, ours jumped into curriculum review the year the standards were published, believing we could place the standards into our already created classes/curriculum and then buy new materials. At the end of that first year, our district leadership realized that the Common Core State Standards (which Minnesota adopted as their standards adding another 8 percent or so) required instruction in ELA to be quite different and that the changes suggested would not be enough. The district leadership worked to steer ELA in the right direction. We took a look at the shifts that CCSS were asking for including integrating/bundling benchmarks, raising the rigor, considering the complexity of text, and moving away from teaching “the book” or “the paper” and instead ensuring student mastery of benchmarks. This meant more than simply changing placement of texts or standards, but also shifting paradigms for instruction. It meant we needed to focus on skill development in a much richer and differentiated way. We also discovered, inherent in the standards, that inquiry was a best bet instructional approach.

Chemistry teacher Ramsey Musallam also encourages “educators to leave behind a simple role as disseminators of content and embrace a new paradigm as cultivators of curiosity and inquiry.” Inquiry requires students to embrace ambiguity, let go of the “one right answer” and consider multiple perspectives. At a recent professional development session where all high school ELA teachers in this district were exploring practical ways to integrate standards into inquiry units of study, I heard many teachers asking for more clarity, additional examples, and to please “tell us exactly what do to.” Irony?

It is our ELA lead teachers who are quick to share their successes, failures, and new shifts in thinking that are helping to calm the fears of those who are resisting the changes. One lead teacher shared her journey in a center-based classroom with students of various needs showing how she used to try to teach standards and functional skills separate from one another. She found as she pioneered inquiry units of study that when she used an overarching question, like “How do decisions, actions, and consequences vary depending on the different perspectives of the people involved?” she could integrate reading, writing, speaking, and social skills in a differentiated way to push all her students forward. She shared with her colleagues this past week that even her students with ASD who thrive in the black and white were able to embrace a new way of learning English/Language Arts. This lead teacher and others are embracing Musallam’s idea that, “Student questions are the seeds of real learning — not some scripted curriculum that gives them tidbits of random information.”

The greatest lesson for me has been the reminder that learning and leading must go hand in hand. 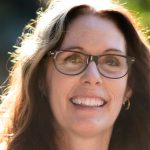 Finding Hope in Ashes: A Guest Post From Laurie Halse AndersonBooks in Bloom