In November, the Stanford History Education Group (SHEG) released the executive summary of a study they had worked on for the past eighteen months. I’ve included the results in a few presentations lately and it keeps reminding me of a lesson I co-taught with a student teacher from my school back in 2012. Here are a few of the slides I use to reference the SHEG study in my presentations.

The SHEG instrument included a task that required college students to analyze a Tweet that featured the results of a public opinion survey about gun control. In their analysis of student responses, SHEG said:

Researchers said responses “suggest that students need further instruction in how best to navigate social media content, particularly when that content comes from a source with a clear political agenda” (SHEG).

So because of this study and the current frenzy to teach teachers how to help students recognize fake news, this really old lesson keeps coming up in conversation. I think it is time to resurrect and update it.

I co-created the lesson with our then student teacher, Danny Ambrosio. He now teaches in Foxborough, MA. Danny was a fantastic instructional partner. For one of his observations, we collaborated with a new English teacher who wanted her freshmen to microblog on Twitter about Harper Lee’s To Kill a Mockingbird. As a fierce advocate for the integration of social media into K-12 learning, I was not about to tell the teacher or Danny what I really thought: “Are you nuts?” Encouraging ninth graders to Tweet about institutional racism and rape seemed like a really terrible idea – even to me.

Instead of nixing the idea, we created a lesson to help students Tweet carefully. They needed to understand how Twitter works and to be mindful of its potential drawbacks as a medium for this particular activity as they created content.

If you are wondering about the title of this post, wonder no more. The phrase was coined by Anne Kornblut of The Washington Post during a 2012 interview with Steve Inskeep on NPR. Inskeep interviewed three reporters on the 2012 campaign trail about a 40-year-old book called Boys on the Bus by Timothy Crouse, which was about the 1972 Nixon/McGovern campaign. I transcribed the relevant segment below (it was also included in my February 22, 2017 post. I apologize for the redundancy but it contextualizes the Twitter lesson):

Steve Inskeep: “There’s another thing that strikes me about this book, and it’s the way that there were a few reporters who are identified who seem to influence other reporters. In 1972, I think I think the leading guy was R.W. Apple – Johnny Apple of the New York Times.”

Jonathan Martin of Politico: “Walter Mears too of the AP. There was a saying about, ‘What’s the lead, Walter?’ which was sort of the stock phrase these guys would say on the campaign trail – and that was to Walter Mears, ‘What is the news out of this event?’ ‘What’s the lead of the story?’ I think that there are still those individuals on the campaign trail, certainly. I think there is much more fragmentation now in the political news media and there are just so many outlets that you don’t quite have the same pack journalism that you probably did back in 1972.”

Steve Inskeep: “Oh wait a minute, let me just challenge that and you guys tell me if I am wrong. I think if I follow the coverage there are many, many outlets who all will obsess over the same irrelevant story at the same time.”

Ashley Parker of the New York Times: “But that’s less of turning to one person who’s sort of the pack leader and I think part of that is a result of Twitter. Which is that anyone with a handle can Tweet out a story and generate buzz for a story so it doesn’t matter if you’re the senior correspondent or you’re a blog with a scoop. And then it all sort of gets retweeted.”

Steve Inskeep: “If you see lots and lots of Tweets about something, do you feel compelled to jump on that story?”

Anne Kornblut: “ I think we at least feel compelled to look into it if nothing else. In a way, Twitter is the new bus.”

Even now, five years later, I regularly refer to that piece when talking about news literacy. During edWeb.net Emerging Tech webinar #74 on media literacy, I asked my guest, USA Today’s National K-12 Education Writer Greg Toppo, about Ms. Kornblut’s comment. He agreed that it was A bus, but maybe not THE bus.

“Twitter is the new bus.” served as a possible answer to one of our lesson’s essential questions “Why Twitter?”

We began the lesson with a mini-lecture. I was a big fan of SlideRocket at the time (whoops!), and Danny and I created the slides in that now-defunct software. I still have some of the screenshots we used, so I did my best to recreate it below.

After the 15 minute mini-lecture, we introduced the following activity. This was in the fall of 2012 and the presidential election campaign was in full swing. I searched Twitter with the hashtag #election for an inventory of 30 or so contiguous “clean” tweets (this SO would not have worked in 2016!), and I screenshot three sets of ten Tweets, which we arranged into one image: 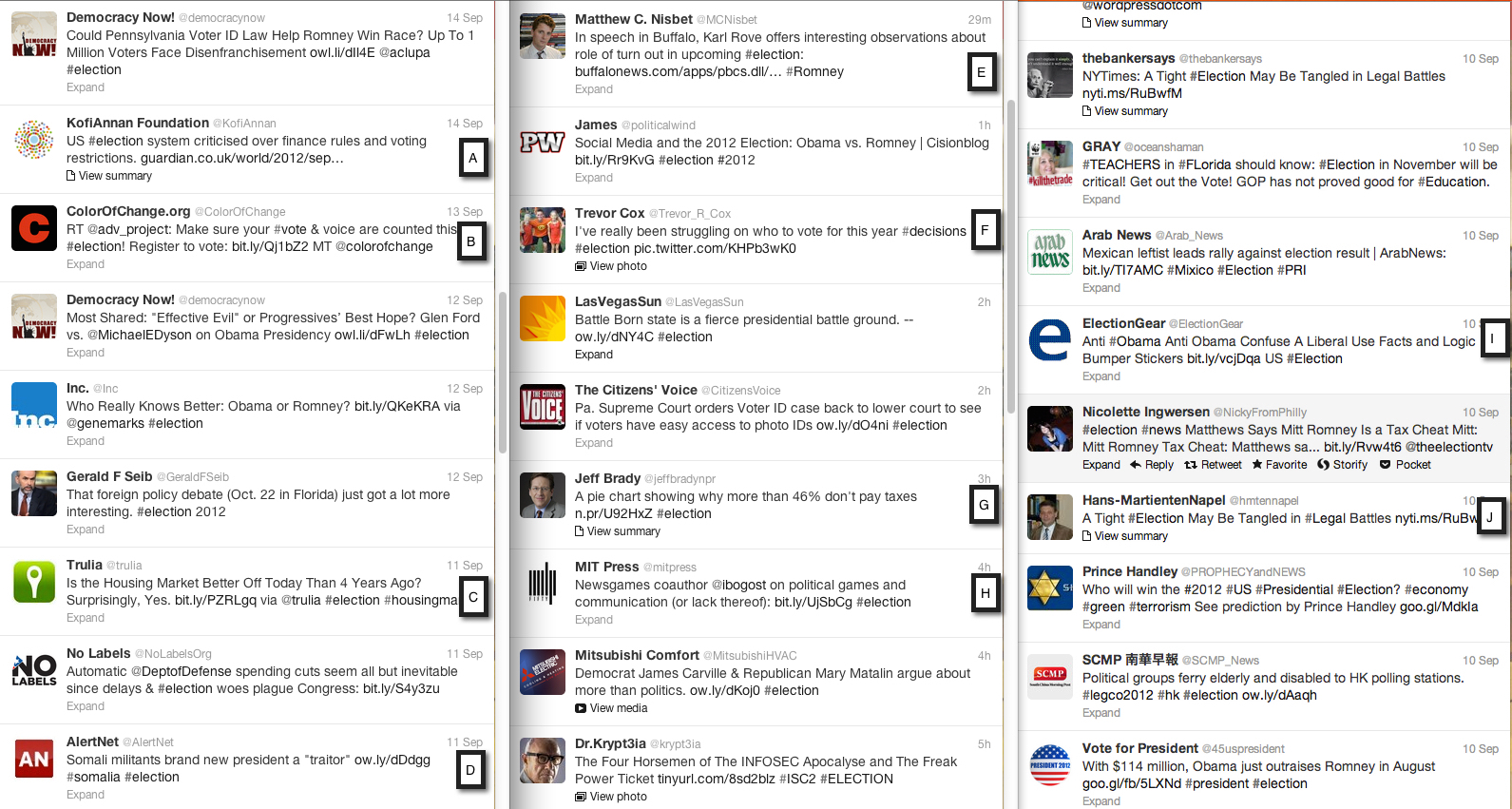 Students were asked to analyze the ten Tweets marked by a box with a letter. They are transcribed below:

We designed 10 simple questions to help students identify 9 of the 10 labeled Tweets. I included the questions along with the correct answers below. We included this bit of instruction at the end, “There are more Tweets marked with letters than required. Omit one.”

There were a few challenges. The open-ended question threw a lot of folks off because they did not realize that there was one unaccounted for Tweet (D). Question 8 was impossible. It made the assumption that students would know at least one of the following four things and they did not.

Question 9 was tricky as well. The Tweet did not indicate that its author was a) Dutch or b) liberal but it was the only Tweet with a link that contained a URL shortener with the nyti.ms root. Danny and I assumed that students would pick up on that but they didn’t.

Were I to write this today, I would change question 6 to make it more inclusive. I (I vaguely remember Danny and I struggling over the language on this one, but I made the call and in hindsight, I think I called it wrong) chose not to use the term “people of color” in the question because I thought it would make it too easy since the Tweet contained the word “color”. Color of Change “design[s] campaigns powerful enough to end practices that unfairly hold Black people back, and champion[s] solutions that move us all forward” but features the photo below on its home page. I would phrase that question differently today. 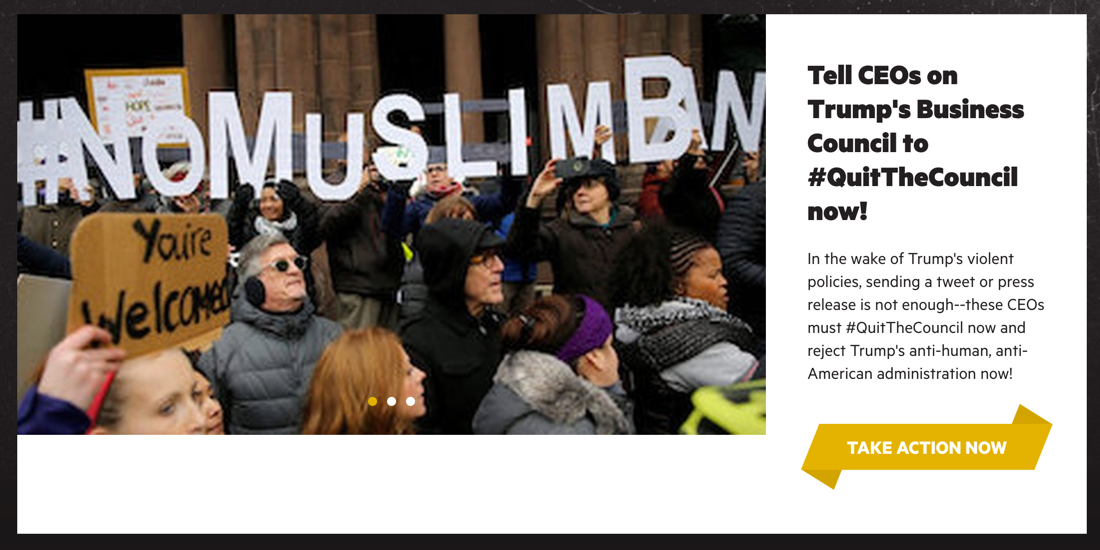 Oh, how I wish we’d done a decent job of collecting data from student responses. I remember just handing the answer sheets off to the teacher with the key. I never knew how the kids did. What a fantastic baseline that would have made! Arrgh! That is a mistake I would not make today. I collect data on everything now. I guess that’s the upside of the teacher evaluation system overhaul.

Students were asked to complete a little exit ticket after the lesson:

Law #1
Information, communication, libraries, media, technology, the Internet as well as other forms of information providers are for use in critical civic engagement and sustainable development. They are all equal in stature and none is more relevant than the other for should be ever treated as such.

As Dr. Joyce Valenza puts it in her outstanding Never Ending Search post, Truth, Truthiness, and Triangulation: A News Literacy Toolkit for a “Post-Truth” World, “There are no guarantees of truth from any source.” and we must “guide students in navigating a growingly nuanced universe of news.”

According to the Pew Research Center, 60 percent of Americans get their news from social media. As UNESCO’s rule number one states, this is not a bad thing – so long as we follow Joyce’s call to action and teach students how to mine all kinds of media for information that is relevant and truthful. Lessons like the one outlined above are an important first step on that path. Unfortunately, there is much work to be done with K-12 administrators to make widely used social media portals accessible to students, but that’s for another blog post.
If you like this post, please add a testimonial (scroll all the way down) to my “Curriculum Champion” nomination for the AASL Social Media Superstar award. Voting closes on April 14, 2017. Thank you!

Presentation Social Media Twitter Webinar
Twitter is the New Business Lesson2017-03-292020-07-06https://www.mackincommunity.com/wp-content/uploads/2018/06/mackin-community-header-logo.pngMackin Communityhttps://www.mackincommunity.com/wp-content/uploads/2017/03/twitter-is-the-new-business-lesson.jpg200px200px
About
Michelle Luhtala
Michelle Luhtala is the department chair of New Canaan (CT) High School Library, and facilitates a professional learning community for over 8,000 educators at edWeb.net/emergingtech. She serves on the American Association of School Librarians’ (AASL) Board of Directors and the Connecticut Digital Library’s advisory committee on databases. Michelle is a contributing author to Growing Schools: Librarians as Professional Developers, and she developed a curriculum for Rosen Publishing’s Digital Literacy database. She blogs at Bibliotech.me. 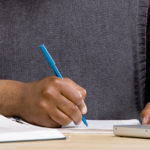 How to Grade 75 Bibliographies in a JiffyAdvocates, Digital