Kids always want to know where writers get their ideas, and in this guest post, Vaunda Micheaux Nelson shares how she looked to her own family for her stories. Specifically, she looked to her grandmothers, and the result is two picture books worth reading.  Always Gramma is, sadly, Out of Print now, but Don’t Call Me Grandma is available in both print and digital formats. We can’t recommend it highly enough. You might share it with classes talking about family history or African-American history. Or you might just read it to appreciate a sweet story of a girl and her grandmother.

We are pleased the share Vaunda Micheaux Nelson’s story behind the story here today. 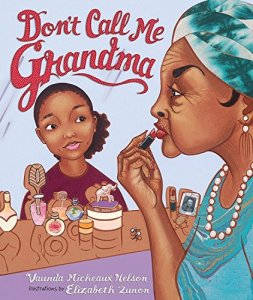 I am blessed to have had two remarkable grandmothers.

My family lived in a small river town near Pittsburgh, just a few minutes away from my maternal grandparents.  We saw them often — always at church and after, and regularly throughout the week. “Gramma” and “Grampap” Batch were like second parents.  We were accustomed both to being disciplined by them and openly sharing love and affection.

Our relationships with “Grandmother” and “Grandfather” were more formal. During summer vacations, my family of seven piled into our station wagon and drove to New York for our annual week-long visit with them in Port Chester.   We rarely ventured farther than the 15 miles to Pittsburgh, so traveling to New York was an adventure.  Dad’s parents had a huge house and yard and they took us to Rye Beach and to PlayLand, a terrific amusement park.  Occasionally we all took the train to Manhattan, which gave us country kids an exciting taste of the Big City.

Gramma Batch was white — Irish and German.  She met my grandfather, a black man, in the nightclub where he was playing in a band.  They fell in love and married in the 1920s.  Her family disowned her.  She gave up everything for my grandfather.  Even when Gramma went to her father on his death bed, he refused to see her saying, “I don’t have a daughter.”   From her, I learned kindness — she’d feed any stranger who knocked on her door.  From her, I learned the importance of thinking for myself.  Most of all I learned about sacrifice and commitment, about what it means to truly love someone.   Gramma was a rare woman, and I feel lucky to be able to say she was my grandmother.  If I’ve inherited even a tiny bit of her strength, her mind, her heart, I consider myself blessed.

I was a young teen when Gramma developed Alzheimer’s disease, which at the time was called senility.  The grownups didn’t share much with us about what was happening to her.  They were so sad and bewildered themselves, perhaps they didn’t know how.  Although I mourned her long before she passed away, I never dealt with my deepest feelings — not until years later when I wrote Always Gramma.

Grandmother Sinah was black, feisty, and stern.  I was intimidated by her.  Still, she amazed me.  She was unlike anyone I knew.  She seemed . . . worldly.  I never saw her in a dress.  When Grandmother was young, she had her pant suits tailor made because stores didn’t sell such things for ladies.  She often wore silky, Oriental-type loungers which gave her an exotic air as she moved lightly about the house.  She had a shot glass showing the face of a man whose eye seemed to move and float.  It was cool but unsettling, a little like her.

I was intrigued.  Who was this scary, glamorous woman?  Her room, with its fancy bed, ballerina doll, and vanity with bottles and bottles of perfume, awed me.  Indeed, I was drawn to her, but I didn’t know how to know her.  I didn’t really find a closeness with Grandmother Sinah until she was in her nineties when she visited Pittsburgh to stay with my mother for a few months.  By then, she had mellowed, and I was old enough to understand her reserve, to recognize that an absence of hugs doesn’t necessarily mean an absence of love.  I regret it took so long, but I’m thankful we connected before her death.  When the family was choosing keepsakes from among her belongings, I knew exactly what I wanted — some of her perfume bottles.  And that floating-eye shot glass, of course.  Since then, her story had been simmering in my head.

Don’t Call Me Grandma enabled me to honor her and to remind readers that there are different kinds of love.

In many ways, Hazel and Sinah were yin and yang.  Hazel was white.  Sinah was black.  Hazel was warm.  Sinah was prickly.  Hazel wore dresses.  Sinah wore pants. Hazel raised daughters.  Sinah raised sons.  Hazel died at 84 having lost her memory.  Sinah died at 96, sharp as a tack.

Uncovering and shaping family stories have been a significant part of my writing life.  I encourage everyone to collect stories from parents, grandparents and other family elders while these individuals are still living — not only to preserve a record of family history but to gain inspiration from those who came before, from knowing something about the shoulders on which you stand.   Writers searching for sources of a story often need to look no farther than their own backyards.

My extraordinary grandmothers helped teach me the full spectrum of love.  I hope a little of that comes through in my work.

About the Author: Vaunda Micheaux Nelson is the author of The Book Itch, as well as three Coretta Scott King Award-winning books: No Crystal Stair, Bad News for Outlaws, and Almost to Freedom. She is a youth services librarian in New Mexico.

About Don’t Call Me Grandma:
Great-grandmother Nell eats fish for breakfast, she doesn’t hug or kiss, and she does NOT want to be called grandma. Her great-granddaughter isn’t sure what to think about her. As she slowly learns more about Nell’s life and experiences, the girl finds ways to connect with her prickly great-grandmother.

Books in Bloom Guest Posts
Finding Story: My Two Grandmothers – A Guest Post by Vaunda Micheaux Nelson2016-10-202019-06-28https://www.mackincommunity.com/wp-content/uploads/2018/06/mackin-community-header-logo.pngMackin Communityhttps://www.mackincommunity.com/wp-content/uploads/2019/06/vaunda-micheaux-nelson.jpg200px200px
About
Mackin Books in Bloom
Books in Bloom is a showcase of the writing and creative talents of our staff librarians. Articles feature titles, themes, and strategies to help educators. Guest authors (from picture books up to YA) even stop by to talk about their newest titles and the process behind them. Books in Bloom is a great (and fun!) tool for librarians and educators to help improve their collections. 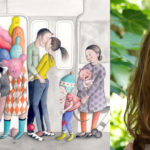 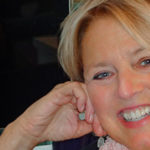